The Life and Times of Putin's Oligarch Kingmaker

“Why are so many Socialists anti-Semite?”

In a topical staging, the Almeida’s Rupert Goold directs Peter Morgan’s interesting play about the Russian oligarch who launched political opportunity for the man who is now waging war on the Ukraine.  Obviously in the name of patriotism. Morgan has specialised in plays about real people with The Audience and Frost/Nixon  as well as writing for television with The Crown.

We follow Boris Berezovsky (Tom Hollander) as a 9 year old schoolboy with exceptional mathematical talent working in the field of decision making.  He is taken on by academic mathematician Professor Perelman (Ronald Guttman) but chooses a career in business rather than mathematics.

It is the 1990s and Russia is reaping the fruits of 1980s perestroika and glasnost, or rather, the Russian nouveaux riches or oligarchs are making money and gaining power.  We meet a security guard Alexander Litvinenko (Jamael Westman) a man of principle which Boris Berezovsky recognises and wants to work for him.  He also meets a man in the security service Vladimir Putin (Will Keen). Berezovsky tries to get Putin to accept a new car rather than his family’s very old Russian manufactured car.

This is their conversation:

BB “Why will no-one take my fucking money?”

VP “What is a man without loyalty?”

Berezovsky also deals with Roman Abramovich (a charming and handsome Luke Thallon) but his insistence on no paper trail for their business arrangement on the oil company profits will come back to bite Berezovsky in the bum.  Sibneft is bought by Abramovich with backing from Berezovsky. Berezovsky has bought the Russian television company ORT and this gives him control of the media.

There is plenty of humour in this otherwise serious play.  Some of the music, staging and lighting reminded me of the excitement of Goold’s production of Enron.  Putin accepts Berezovsky’s offer of introduction but complains that he wants to be in politics not security.  When Putin sees what he assumes to be a banqueting table, he is told, “It’s your desk, Sir.”  We have seen this “desk”, with its own social distancing, on the current news items about the war in Ukraine!

Berezovsky complains to Putin that he had kept Russia’s top businessmen waiting an hour to meet him at what used to be Josef Stalin’s dachau and then said he was too busy to meet them.  Amongst other things Berezovsky says, “I put you there.  I found you.  I endorsed you.”  Interesting that Putin should choose this location with its Stalinist associations. At this point I started to admire Putin for his stance in resisting a corrupt businessman.

There is this powerful discussion where Tom Hollander really lets rip as he calls Putin “a contemptible rat!”   Berezovsky’s revenge is for his television network to tell the truth about the submarine Kursk tragedy.  This anti-Putin success is greeted by Indiana Jones type music of celebration.  “Get In!” shouts Berezovsky but of course Putin decides to take over the television company and Berezovsky has to flee Russia. Meanwhile Abramovic is given a remote province to govern, Chukotka Autonomous Okrug, near Alaska where all the visitors stay in Anchorage because the hotels are decent!  Whereas in this thriller Berezovsky is losing Putin’s allegiance, Abramovich’s star is on the up.  Berezovsky accuses Putin of having a policy of “statish authoritarianism and hatred of the West.”

We know what happens to Litvinenko in London, see Lucy Prebble’s  A Very Expensive Poison.  Berezovsky suggests that it is quite possible that the Chechen terrorist incidents in Moscow were not carried out by Chechens but by someone who wanted to discredit them.

The performances are sterling.  Tom Hollander’s powerhouse as witty and determined Berezovsky, Will Keen’s darkly and quietly authoritative and authoritarian Putin and Jamael Westman conveying Litvinenko’s true integrity.  Luke Thallon is also one to watch with his portrayal of Abramovich’s charismatic but steely self interested character.

Brilliant directing from Rupert Goold.  Would he take the National if offered it?  Would he want it with its debts?  But please go and see Patriots.  I am giving it the rare accolade of five stars from the theatre site that doesn’t do stars.

at the evening performance 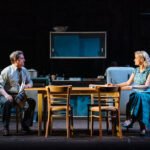