“It was a fully operational affair. Sexually, emotionally and utterly unfaithful to you.  I had finally realised that you were not the person I hoped you were. That you were, in fact, something less.”
The Woman

Set in an amazingly transformed Royal Court Jerwood main auditorium is the first play for the stage by Mike Bartlett, My Child.  You might think that you had not left the nearby Sloane Square underground station because the play is set in a wide tube train like area with yellow grab poles which must have been supplied by the train carriage outfitters.

The audience stand or sit, lined in two long balcony areas with just a few at either end, and the whole play is as if one has stumbled into a real life drama being enacted out on the Underground. Some of the audience sit at those low metal tables that they have in designer coffee bars.  The actors mingle with the crowd and are at first indistinguishable from them.

My Child is about divorce and schism as, after divorce, the Man (Ben Miles) finds himself being sidelined out of any involvement with his own child (Adam Arnold).  His ex-wife, the Woman, (Lia Williams) has remarried and her son is relating more to her new husband Karl (Adam James), than to his father.  When the boy comes back from a visit with his father with a hurt arm, she uses this as an excuse to stop the father seeing his son. The father tries to influence his wife’s mother (Sara Kestelman) who is an invalid.  He kidnaps his own son as a desperate measure but is pursued by Karl, who takes back the boy who now calls Karl, “Dad”, something that makes us wince with the injustice of it.

The family relationships shown in My Child are not based on love but on possession, duty, power struggle and hatred.  The Woman resents the way her mother parented her and now when her mother needs care she repays her with unkindness and resentment.  The child wants a father who is rich and can buy him toys in Hamleys and learns to manipulate his mother by feeding her lies about his father. The boy too repeats the awful things he has heard his mother say about his father to his father.  It is a bleak picture of a society where people are violent towards those they once loved.  The Man just wants to be a part of the child’s life and tried to be good as his parents told him to be but cannot see past his own needs in respect of the child.

Although the play is just 40 minutes long, Mike Bartlett’s dialogue is so incisive that My Child makes a much deeper impression.  The Woman particularly has a whole armoury of the most wounding remarks, designed to destroy her ex-husband’s self esteem.  When the Man and the boy have some time together, he tells the boy about the night of his birth.   This is the longest speech in the play and the only one recalling a happy time when his parents needed each other. But even that memory is spoilt by the Woman’s vicious insinuations that he might not be the father of the child and that she didn’t love him then.  Not content with ruining the present, she is also destroying any illusion of past happiness.

Ben Miles is the unemployed father under fire, a lecturer in philosophy, completely powerless to change things, to influence anyone, even please his own child.  His is the most sympathetic portrayal, but it is a picture of a man obsessed, evidenced by the comparison to the cow separated from her calf.   As a father, he can see only his own needs, not those of his son.

Lia Williams puts in a fine, ugly performance as the vindictive Woman. The boy looks confused and uncomfortable during the arguments and of course the audience is really close especially during the fight which starts to look dangerous to those seated in the front row. It is a bleak portent for the future with damaged children in the front line of a family at war learning manipulation and cruelty who will become the parents of tomorrow.

My Child
Written by Mike Bartlett

Running Time: 40 minutes without an interval 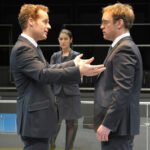