“I hope the government knows what it’s got us into!”
The Officer

I had heard of course from those who had seen it at the Edinburgh Festival in 2006 that Black Watch was a rather special theatre event. I was blown away by the direction and staging of this story of the 800 men of the Scottish regiment sent out to Iraq, to replace 4000 American Marines in the area around Fallujah.  We Londoners have waited impatiently, almost two years, to see Black Watch while it toured the world to the greatest acclaim and even now the impossibly short run, as a part of the Barbican BITE season, was sold out before it opened.

From the second scene where two soldiers make the most surprising entrance that heard me gasp aloud, I was enthralled.  The language is authentic and needs to carry a warning for those who might object to a realistic reflection of the swearing of real soldiers.

Gregory Burke’s play is fascinating because it opens with the men being interviewed by a journalist, cuts to Iraq and back, placing these men of Fife and Tayside in their Scottish regimental heritage by telling us something of the history of the regimental engagements.  We are brought up to date by the playing of a film of Alex Salmond of the Scottish Nationalist Party condemning the Government cuts merging some Scottish regiments including the Black Watch.  These cutbacks are insensitively announced while the men are on service in Iraq and after the deaths of three of them have been reported in Scotland.

The play opens with some yobbish lads using sexual language and pelvic thrusting at the thought of bonking the female journalist researcher, and ends with a feeling of tremendous respect for the traditions, training, discipline and bravery of these men.  This isn’t achieved by resorting to some sort of nationalistic fervour but by staging different events in their lives which illustrate their humanity.  We know that employment opportunities for these Scotsmen have largely disappeared.  The great shipbuilding firms have closed down.  Margaret Thatcher saw off the coal mines.  The army represents an employment opportunity of which there are precious few.  We see the brutality too, as Cammy says, “Bullying’s the fucking job. That’s what you have a fucking army for!”

Burke also gives us plenty of humour: the rookies studying their battlefield skills which stress the importance of carrying a blank piece of paper to wave at anyone demanding anything.  Apparently no-one ever looks at what the piece of paper says. The older hands cool themselves in the Iraqi heat by sitting in their underpants with their “trewsies” round their ankles.  They tell the Sergeant they are conserving hydration and spinning their readiness for action to compare themselves with firemen who can leap into boots and trousers in one go!

Letters from home to the gentle piano music spoken in the silence of synchronised sign language, are beautiful, evocative and moving.  There is a group of men showing themselves to be touched and involved.  The illustrated history of the regiment from before the Battle of Culloden in 1745 through the American Revolution, the Napoleonic Wars, the Crimea, the Boer War, the First World War, Palestine, Syria, Mesopotamia in 1919 (now modern day Iraq), the Second World War, Korea, the Mau Mau in Kenya, Northern Ireland up to the present day, is played out.  This is cleverly achieved by taking one soldier, holding him sometimes horizontally, and dressing him in the uniform of each period of history from the Black Watch tartan kilt and throw, with red check leg covers and the redcoat jacket through to a bonnet of black feathers to a khaki kilt, explaining how George III gave them the “red hackle” in their tam o’shanters.  This depiction of history informs and affects and instils the tradition that these men carry through.

There are choreographed fight scenes where men throw punches and half roll interspersed with scenes playing billiards.  The terrible deaths of three at a car checkpoint are staged impressively and distressingly as their bodies fly upwards, blood mixed with dust looking pale pink rather than red, and we hear the army code for those hurt in action which has just been explained to us, two letters from their surname, followed by their number, then P1 for walking wounded through, P2 and P3 to P4 for life extinct.  This shocking tragedy takes place with a plainsong lament in Gaelic. When the journalist interviews some soldiers in their leisure club, others listen holding their billiard cues like rifles and leaning forward in symmetry and alertness to catch the words.  Black Watch is stuffed full of powerful, dramatic visual memories, snapshots of these men in action.

There is music too. Traditional Scots Songs about the achievements of the Forty Twa.  Twa is Scots for Two and the Black Watch were the Forty Second Regiment.   At the end of the play, the Piper’s Lament is played by one actor on bagpipes as a tribute to the dead.

Set on a traverse stage with the audience raised at either side, there are explosions and flashes of light forcing the men to fall to the ground, the rookies falling every time anything goes off, the experienced men fall only when they know it’s dangerous so they tumble in stages.  When we get to Iraq, the lights are turned up so that it feels hot as the desert and the sun glares.  A billiard table imaginatively becomes an armoured transport vehicle with six men in it.

The finale sees the company of men lining up for marching using their arms to judge the distance apart, forming battle lines, falling, rising and coming back for more, again and again and again.  This is an ensemble piece of highly proficient actors, beautifully choreographed and delivering acting perfection.  The National Theatre of Scotland deserves a medal for this play.

Reviewed by Lizzie Loveridge at the Barbican on 5th July 2008 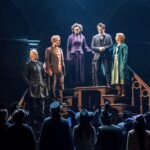