The Brothers Size captivate in a majestic, mythical and magical production

“Can’t do nothing for a man who miss his brother like that.
Sound like a bear trapped in some flesh-tearing snare hollering like that.
Can’t mock no man in that much earthly pain.
He cry out and, hell, he make us all miss our brothers.
The ones we ain’t neva even have.”
Elegba

The Brothers Size is a magical play that will stay with you long after seeing it performed. This mythical quality comes not only from Tarell Alvin McCraney’s lyrical writing but from the magnificent haunting production given to us by director Bijan Sheibani.  I had paid to see The Brothers Size at the Young Vic last year, too late to review in the dying days of the run, and was blown away by the actors Nathaniel Martello-White and Nyasha Hatendi.  From the moment when white chalk and string is used to delineate the perfect circle playing area and some red chalk is crumbled onto the black floor as a powder to be smudged like drawings of bursting fire works, I was enthralled by the rhythm of the words and the grace of the movement.

We are told that the inspiration for The Brothers Size comes from Nigerian Yoruba mythology and this tale of two brothers, one of whom has been in prison coming home to the censure of his elder hard working brother has a prodigal feel.  In Yoruba mythology Ogun is the god of ironworking, the chief of the gods and Legba is a trickster god but I cannot find a parallel with the traditional description of Ochoosi as a huntsman.  In McCraney’s play, the brothers Ogun (Daniel Francis) and Ochoosi (Tunji Kasim) squabble with each other like real brothers, blending rivalry and support, competition and control. Only later do we realise that Ogun has been in the parent role to Ochoosi. Then there is the mysterious Elegba (Anthony Welsh), a magician, bad boy and dangerous friend with whom Ochoosi has shared a prison cell.  The audience’s reaction to the play is that it is both dramatic and involving.   The stage directions are often spoken before they are acted. “Kissing teeth,” says Ochoosi and then he draws out that hissing sign of disdain and we laugh, as we do when they describe rolling over in bed and then doing it.  It gives these actions a self consciousness, another dimension, which brings the characters to life by underlining each small event and this style emphasises the storytelling aspect of the drama.

The language is beautiful and graphic, and distinctly contributing to the Southern atmosphere of the swamplands of Louisiana.  “Elegba enters, drifting, like the moon. Singing a song.”  for all his trickery he is an attractive character although of course one that threatens Ogun’s authority in determining the future he wants for Ochoosi.   They play out scenes we can all regcognise, as Elegba talks about his encounter with the sheriff, he has one hand on the gun holster and uses the other to gesticulate and there is a gentle humour to many of their scenes.  I liked too the jokes based on their name, No1 Size and No 2 Size or looking for the other Size.

Daniel Francis has the seriousness of Ogun while Tunji Kasim as Ochoosi and Anthony Welsh as Elegba are like the younger, and less weighed down by their responsibilities, generation.  Having seen two sets of actors play The Brothers Size I can see that the writing and direction are as much factors contributing to the success as the good performances.  There is also music and song.  A highlight of the closing scenes is the miming to Otis Redding’s “Try a Little Tenderness” and then suddenly we’re alone in the night with just the gentle chirrup of the cicadas.

With the second part of Tarell Alvin McCraney’s trilogy In the Red and Brown Water also showing at the Young Vic, this is an opportunity to see these linked plays together but do not miss The Brothers Size for its special blend of vibrancy and hope, of family ties and love and the desperation of trying to save a relative who is on a journey of self destruction.

Running Time: One hour 30 minutes with no interval

Closed at the Young Vic on 8th November 2008 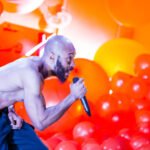