Lucy Bailey's Macbeth starring Elliot Cowan is both the bloodiest and the most visually exciting...

“When you durst do it, then you were a man. “
Macbeth

When I think back to the days of the 1997 Globe, I can see how far they have come and how adventurous the productions have become in this traditional space. But Lucy Bailey’s Macbeth is the most innovative visually I have seen there.

The first device is one which deals with all those distracting members of the Pit who wander around in the sight line, their clothes and bags detracting from the events on stage. They are of course part of the atmosphere at The Globe but distracting nonetheless!

I have often wished that the Pit members could be dressed in Elizabethan costume to complete the historical recreation.  A couple of years ago we saw those enormous faux marbled Globe pillars supporting the roof covered with fabric to give a different look, and for this production they are covered in black fabric held on with belts of leather.  But here is the genius touch.  Across the standing area of the Pit is stretched a huge circle of black fabric with slits through which the audience members can protrude their neck and head.  The effect is two-fold.  It keeps the groundlings stationary and all, the rest of us in the surrounding seats, can see are disembodied heads.  This circle of cloth is reflected above by two enormous iron ring gantries from which hang chains and a gauze curtain for the circular introduction of cooking pots and the like.

Of course the fabric surround isn’t without problems as it makes some of the exits and entrances blind for the cast.  In the excellent programme which accompanies all Globe productions, Lucy Bailey tells us her inspiration is from Dante’s Inferno and in Gustave Doré’s 1868 illustration of the heads of sinners wedged in a lake of ice.

The first scene comes from a human abattoir when the soldiers caught up in the battle rise from the black canvas from among the audience, their torsos covered in blood, writhing in agony, their arms out stretched to the heavens like a traditional image of Hell.  These jaw dropping visuals herald the arrival of the three weird sisters, one considerably shorter than her sisters.  This is Karen Anderson the diminutive actress from the movie Don’t Look Now.   Javier de Frutos is the brilliant choreographer who has devised this moving vision of Hell for Lucy Bailey.  Keith Dunphy as Macduff leads on while bells toll, smoke and funereal music herald the grisly death of Cawdor (Ken Shorter).  While Cawdor is murdered the king, Duncan (James Clyde) presides over a religious service the crosses made from pairs of daggers.

As the youthful Lady Macbeth (Laura Rogers) makes her “unsex me” speech, the three witches gather to observe as they do throughout the play. When Macbeth (Elliot Cowan) arrives home to his wife, their reunion is hungrily sexual.  The Hebridean love lilt “Vair me oro van o/ Vair me oro van ee” is sung for the bedtime ritual of the king before Lady Macbeth taunts and manipulates her husband into the murder.  We genuinely feel this murder would not have happened had not the witches made their predictions and had not the Cawdor claim already come true.

Elliot Cowan’s Macbeth seems to be a good man pressured into murdering his guest, the king, by his naive and greedy wife.  This vaulted ambition will eventually take everything that the Macbeths have away from them, hence the tragedy. There are sweet family touches as we see what the Macbeths might have become when they both seem to dote on Fleance (Josh Swinney/James Beesley), Banquo (Christian Bradley)’s son.  Elliot Cowan seems to convey quietly the torture of his mind.

The porter (Frank Scantori) is a grotesque — morbidly obese and in a filthy vest like a medieval painting — who threatens to empty his piss bucket over the groundlings to much squealing.  This is the closest Macbeth gets to comedy.  The ghost of Banquo, as I have seen before, emerges bloody from among the roast meat carcasses at the banquet, between the rack of lamb, the side of beef and the roast suckling pig.  The murder of Macduff’s children is heart rending and five wailing Scottish pipers accompany this sickening scene.  Lady Macbeth’s madness is a quiet frenetic hand washing affair.  With his last meeting with the witches Macbeth actually appears in the cauldron.

There is no doubt here that the visuals eclipse the performances but I expect these to become more balanced as the cast gain confidence in this playing space which isn’t without difficulties.  At three hours this is a kind of hell for one’s derriere on the Globe’s wooden benches, but worth it! 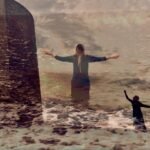