“For man is a giddy thing”
Benedick

Set in 1980s Gibraltar, Josie Rourke directs favourites Catherine Tate and David Tennant from the popular BBC television serial Dr Who, in an updated version of Much Ado About Nothing.  Whereas David Tennant has had several years acting with the Royal Shakespeare Company and many other theatre roles under his belt, Tate has much less stage experience.  She is mostly known for her television comedy work having added catchphrases to the nation’s vocabulary like “Am I bothered?”  It is a marriage made in producers’ heaven as these two actors draw a new British audience for Shakespeare into the West End and taps into their Dr Who fan base.  Ah, but the question is will they be watching a subtle comedy or a populist re-vamp of Much Ado Lite?

Subtle it is not. Catherine Tate’s Beatrice is all sarcasm and guffawing comedy but never do we see the insecurities of Beatrice, a woman unmarried and of a certain age who undoubtedly hides her sorrow beneath the humour.  It was Judi Dench who famously burst into tears as she delivered the line, “No, sure, my lord, my mother cried; but then there was a star danced, and under that was I born. . .”  Tennant’s awaited arrival is in a golfing cart and he is wearing a naval officer’s tropical kit white uniform and sun glasses, part of his celebrity persona.

David Tennant is a lovely actor and not even the ugly costume for the ball of a drag outfit for him, pig faced mask, long blonde wig, mini skirt and black lace tights can destroy his charisma.  I loved the brilliantly executed scene later when Benedick overhears the device where Claudio and Don Pedro deliberately lead him to believe that Beatrice is in love with him.  He puts his hand into a tray of white paint and in amazement, the hand to face gesture leaves its mark.  Each time we see him from behind the revolving pillars he is covered in more paint, such is his astonishment.

In the parallel scene where Beatrice is to overhear how Benedick supposedly feels about her, Tate is hauled up on a painter’s wire so that we are unable to concentrate on what she is overhearing, so riotous is the clowning comedy.  Robert Jones’ design has sunbeds and bright white pillars with much of the scenery being painted and the revolving set is used with regularity.  Peter Mumford lights the Mediterranean sunshine.

The Dogberry interludes fall flat in comic terms, with Dogberry (John Ramm) in camouflage uniform, when there is so much comedy already in this play from Beatrice.  The stag and hen night parties for the beautiful couple Claudio (Tom Bateman) and Hero (Sarah MacRae) are thoroughly modern, vulgar and riotous and provide for Don John’s (Elliot Levey) plot to come to fruition with Margaret (Natalie Thomas) wearing Hero’s hen party veil and mistaken for her in a sexual encounter.  The wedding scene has Hero wearing the ill fated Princess Diana’s wedding dress. Very 1980s yes but distasteful?  Maybe.  The mannered and camp bastard Don John looks both interested and pleased as the evil bystander, a perpetual sniffing accompanying his part.

I think I might not have found the production values as annoying if I had found Catherine Tate to be more sympathetic, just a little calmer and stiller on occasion, rather than hogging the stage with her laddish presence and Estuary English twang.  True, the actors are enjoying themselves and so are the audience but I wonder how many of the audience will know the names of the characters Tennant and Tate are playing?

Much Ado About Nothing
Written by William Shakespeare

Closed at Wyndham’s on 3rd September 2011 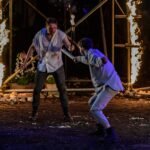