“I said that racism is a device that, of itself, explains nothing. It is simply a means. An invention to justify the rule of some men over others“
Tshembe

Written from her viewpoint in the 1960s by American playwright Lorraine Hansberry, the original person to be described as “young, gifted and black”, her unfinished play Les Blancs, examines an unnamed African country on the brink of revolution and independence from colonial rule. Lorraine Hansberry was in her mid thirties when she tragically died of pancreatic cancer. The title is not a hint that this African state was under French or Belgian rule but a response to Jean Genet’s 1958 play Les Negres which Hansberry critically reviewed.

Yaël Farber’s immersive production gives the perspective of two new arrivals at the mission hospital set up by the Reverend Neilson whom we only hear about, but never see. One is a photo journalist, a white American liberal, Charlie Morris (Elliot Cowan) who is writing a story about the mission and the other Tshembe Matoseh (Danny Sapani) a well travelled, successful man from this village who is returning because his father is terminally ill.

The span of colonial attitude is there from the hypnotic, spiritual figure of a very tall, etiolated native African woman (Sheila Atim) who runs or glides elegantly and silently across the stage looking as thin as thin, representing the starved spirit of Africa, to Clive Francis’ reactionary army Major George Rice whose job is to quell terrorism. Of course one man’s terrorist is another’s freedom fighter and Sidney Cole plays Peter the trusted mission servant who is also secretly the leader of the freedom fighters. Four African women, two of them white, faced, (Nofenishala Mvotyo, Nogcinile Yekani Nomaqobiso, Mpahleni Latozi, Joyce Moholoagae) form the matriarchal chorus in this classically referenced play.

The mission residents are the committed Madame Neilson (Sian Phillips) who talks about Africa using the Meryl Streep as Karen Blixen’s Scandinavian/white African accent “I had a farm in Africa” from the film Out of Africa. “The same cold wind blew in here and chilled the people towards us,” she says. Anna Madeley is the dedicated doctor Marta Gotterling who despite her caring profession has white supremacist attitudes to the Africans and acts as an apologist for Major Rice’s tactics of suppression. James Fleet is another doctor, Willy Dekhoven, who is politically less extreme but who has fallen subject to the white man in Africa’s alcoholism of despair. Dr Dekhoven tells Morris that Marta doesn’t think very deeply.

Tshembe has two brothers, Abioseh (Gary Beadle) who is near completing his ordination as a catholic priest taking on the white man’s religion but not that of the protestant Neilsons, and Eric (Tunji Kasim). Eric who is mixed race exhibits the inbuilt conflict of his dual heritage with a black mother raped by a white father. Dr Dekhoven has been giving Eric alcohol. But “Who is his father?” was occupying the audience in the interval, it being so much easier to focus on the personal rather than the larger political issues.

It is Tshembe who explains that before they took to the bush, the Africans had tried to be heard, at first locally and then in the African capital and finally in Europe at the heart of imperialism. We know how rare it is for power to be handed to others without a struggle. This process of being heard democratically is echoed by Charlie Morris, unaware it has already been tried and failed. Tshembe has been to Dachau and Auschwitz and seen the racism of white on white. Now in 1960s Africa, white people and their children are being murdered, which of course entrenches the attitudes and fear of the white settlers who, like Major Rice, regard it as their country.

Soutra Gilmour’s skeleton of a pale wooden Scandinavian mission hospital has detail, steps and a porch and the Olivier revolve is used by the director to change scene accompanied by the atmosphere of the chanting and singing Xhosa women. There is fire and smoke throughout the production.

The performances resonate and I was drawn to Danny Sapani’s Western experienced African and Elliot Cowan’s humane and idealistic observer but it seems churlish to mention some and not others. Tunji Kasim’s broken Eric is really sad (his mother was raped and died in childbirth; she was Mrs Neilson’s friend) but the picture that stays with me overall is of the spirit figure of that beautiful but blighted continent, created by Sheila Atim.

This production is spellbinding and its momentum stays with me occupying my thoughts, whirring like the Olivier’s revolving stage. The text, finalized by Lorraine Hansberry’s former husband and literary executor Robert Nemiroff, would bear much further study to grasp all its themes and nuances.

Director Yaël Farber was born in apartheid controlled South Africa and has seen many of the changes to sub Saharan Africa. While in dramatic terms Les Blancs may at times feel like a lesson in post-colonial politics, its prescient arc is important and revealing and not to be missed. Mrs Neilson’s closing words are, “Few men have the opportunity to see the end of an epoch and know it.”

Reviewed by Lizzie Loveridge at the Olivier on 4th April 2016 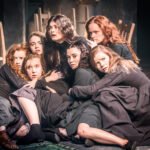 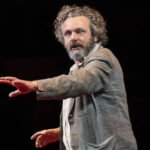