Mike Bartlett's latest play about a defecting whistleblower is cataclysmic...

Mike Bartlett’s latest play examines the fate of Andrew (Jack Farthing) an American whistleblower who has changed the world by revealing secret activities including torture and mass observation, spying on citizens and other countries.  Three days after his disclosure to journalists he finds himself in an anonymous hotel room, maybe in Moscow, with a tall, attractive woman (Caoilfhionn Dunne) talking enigmatically nineteen to the dozen.  It is like a sophisticated computer game except that this man has left behind his family, his friends, his girlfriend and is liable to have his extradition requested from most of the countries of the western world.

In this age of the exchange of so much information, Mike Bartlett challenges what we really know, if anything.  The Woman shifts her identity and acts in a frenetic way making us wonder if she is bi-polar.  Is she vivacious or hyper?  Who is she? She gives a few different but unconvincing names.  Who does she work for?   Are they really in Moscow?   What is clear is that there is no protection for whistleblowers or their families when government secrets are revealed.  What a high price to pay for doing what you consider to be right and in the public interest!

We realise that Wild is loosely based on the fate of Edward Snowden, the American computer analyst whistleblower, now living in Moscow after showing America’s allies how little they were trusted by intelligence agencies.  The person Andrew would hope to meet would be from a WikiLeaks type organization to offer him protection and he remains confused after the Woman alternately taunts and reassures him.

The Woman leaves the room and we are none the wiser.  Enter the Man, (John Mackay) who is tall, thin and decidedly sinister.  His shiny patent black shoes have brown suede laces. He denies that the Woman is from his organisation although they both go under the name of George.  He tells Andrew that he will be the subject of contracts to kill him and we wonder if George is there to do that.

The Man implies that the Woman is an imposter and asks Andrew whether he asked for identity. Andrew then asks him for identity. This increases Andrew’s discomfort and increases his paranoia.
Jack Farthing is convincing as Andrew, he looks pale and tense as he reflects on his actions. Caoilfhionn Dunne gives a very rapid and disorienting performance which has loads of energy and switches of mood.  John Mackay as the Man is sinewy and duplicitous as Andrew looks at what he has done to his life for the benefit of others.

This play will be talked about and will probably win awards for its eye-opening closing scenes which are apocalyptic and which the critical code means we cannot write about. The conclusion? “You cannot trust anyone or anything.” 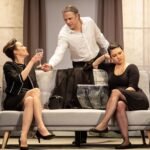