Mike Bartlett's first play gets its first staging from Defibrillator...

“I had orders not to talk. So I wasn’t talking. To anyone. I just played piano.”
Amanda

Mike Bartlett is well on his way to becoming established as our best living British playwright.  I see only Tom Stoppard as his competition.  Twelve years ago, this was his first play, not published until 2011 by Methuen as a part of the first collection of Mike Bartlett plays. Not Talking has never been produced onstage until now. It was found by James Hillier of Defibrillator, whose mission is to produce rare plays that “have been forgotten or are in need of creative reinvention”.

We first meet Lucy (Kika Markham) and James (David Horovitch), a couple now in their eighties who talk alternately about their courtship in Sussex and the miscarriage of their first and only child.  Lucy’s way of coping with this grief is in not talking about it, but this kills the intimacy in their marriage. The play goes on to show another situation where “Not Talking” has been a woman’s response to great distress.

As men are called up in the Second World War to join the armed forces, James is summonsed and tells the authorities that he is a conscientious objector. He is made to appear before a tribunal, where his position of Christianity and non-violence is challenged. He justifies his case, but it makes him feel different, uncomfortable. On his way out from the exchange where he first registered his conscientious objection, he meets a woman who shows him empathy and who asks him to tea.

James’s scenes about avoiding the army are intermingled with those of Mark (Lawrence Walker) who is joining the army in the 2000s and who has been told he is to go to Iraq. Mark has just met a female soldier recruit Amanda (Gemma Lawrence) and they have an evening of dancing and drinking. Then something happens to Amanda and she is threatened by the army and told not to talk about it. Her response is to stop talking altogether which irritates and annoys the army.

There is not talking and then there are secrets. One person has secretly intervened in the life of another, another person under duress has chosen not to speak out. Mike Bartlett sets up these situations alongside each other so that we, the audience, can reflect on our behaviour and its consequences.

Director James Hillier and Defibrillator have good experience directing original writing and so here he brings to life the four people caught up together.  The casting and acting performances are excellent: Horovitch’s James with a conscience and a mission he can carry out and show bravery, Markham’s piano playing hurt woman, Walker’s youthful soldier and Lawrence’s terrified female recruit, who also seeks solace in music as her form of expression when she cannot articulate the wrong.

The plays from Mike Bartlett’s extensive and diverse repertoire I like best are those where he writes about families and relationships, rather than those weightier plays about national issues. This is because his writing is a starting point for discussion. With the older couple here, the rights and wrongs which I haven’t disclosed, have a balance that we can debate.

Not Talking
Written by Mike Bartlett 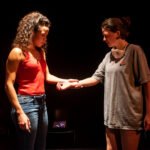