Marianne Elliott’s new production of Stephen Sondheim’s Company is a modern spectacular. Never has a revival of this 1970 musical felt more current and fresh. After every number, I was left thinking “Why has no one ever thought of doing this before?”

In the original, Bobby is a successful, single man living in New York City. He is celebrating his 35th birthday, whether he wants to or not, surrounded by friends most of whom are married couples. As he goes to blow out his candles and make a wish, Bobby realises he may be missing something, a wife. Through a series of scenes where Bobby is invited around to each of the couple’s homes, they inevitably get onto the topic of conversation about why Bobby is still single? After seeing how his friends are as married couples, Bobby starts to question himself and whether or not marriage is for him after all.

Whilst keeping most of the original dialogue, Marianne Elliott has transformed this musical by changing just one simple attribute of a few of the characters: their gender. Bobby, the central male character becomes the female Bobbie (Rosalie Craig). Bobby’s girlfriends; April, Kathy and Marta are now Andy (Richard Fleeshman), a handsome yet ditsy flight attendant, Theo (Matthew Seadon-Young), a lovable geek and PJ (George Blagden), a British hipster who is too cool for the uptown scene. Lastly, anxious bride-to-be Amy is turned into bridegroom, Jamie (Jonathan Bailey). But Paul, Jamie’s husband to be (Alex Gaumond) remains male, which means that this musical gets its very first gay couple, adding yet another contemporary element to this game changing production.

Floating through doors from one frame lit scene to the next and dressed in bright red to match her fiery locks, Rosalie Craig is charismatic and endearing as Bobbie. Her voice is tender yet soaring in her breathtaking performances of “Marry Me a Little” and “Being Alive”. “You Could Drive a Person Crazy” has been re-imagined as a barbershop-style number with silky harmonies being performed with class by Fleeshman, Seadon-Young and Blagden.

Mel Giedroyc brings all of her famous quirkiness and impeccable comedic timing to the role of yo-yo dieting, brownie-loving Sarah. Jonathan Bailey’s Jamie is the perfect balance of neurotic and adorable. His solo number, “Getting Married Today”, is by far the most zany number of the show and it is sprinkled with hilarious surprises that are pure genius. Watch for the entrance of the presiding minister. In the role of sharp-witted Joanne, Patti LuPone is showstopping. LuPone showcases her warm-toned vocals with elegance in “The Ladies Who Lunch”.

What makes this production stand out are the superb talents of its creative team. From the moment the curtain goes up, Ian Dickinson’s sound design immerses the audience within the hustle and bustle of New York City. In “Side by Side by Side”, Liam Steel’s choreography is full of energy, yet is still performed with great precision. Bunny Christie’s design captures chic apartment life in the Big Apple, with intimate boxes their framed surrounds neon lit to form compartments that are fully furnished in grey, allowing the focus to be maintained on the cast at all times. The addition of Chris Fisher’s slick illusions, make for a hauntingly beautiful realisation in “Tick Tock”.

Marianne Elliott, who directed the award-winning The Curious Incident of the Dog in the Night-Time, has delivered an inspired revival. Stephen Sondheim saw its first preview and is reported to have given it his blessing. This show carries a powerful message that will resonate with its millennial audience and will please Sondheim fans and visiting Americans. All whilst leaving a lasting impression on London’s West End.

The Little Things You Do Together

You Could Drive A Person Crazy

Have I Got A Guy For You

Marry Me A Little

The Ladies Who Lunch

Closed at the Gielgud Theatre on 30th March 2019 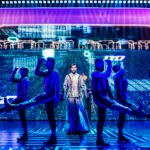 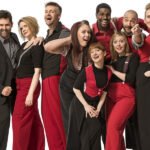 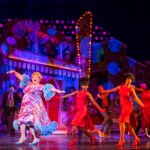