“Why did he send down matches if he knew there was no gas?”

The Dumb Waiter is a quintessential early Pinter play from 1960, one that feels almost Beckettian if not absurdist.  It is set in a room, a situation with bags of sinister mystery with just two players.  I always think of what the French writer Jean Anouilh said about Waiting for Godot on seeing Beckett’s play for the first time in Paris in 1953.   “Nothing happens, nobody comes, nobody goes. It’s awful.”

With twentieth first century dramatic minimalism there is a certain joy in a non-coughing audience listening to the quietness of nothing happening onstage; those pauses Pinter is famous for.   The calmness contrasts with the building tension.  The two men, Ben (Alec Newman) and Gus (Shane Zaza) are in Birmingham, staying overnight and there to do a job in the morning but we have no idea what kind of job this is.  We start to get an idea when one man gets out a pistol, not the kind of workman’s tool we were expecting.

The room itself has no windows and is claustrophobic, rounded concrete walls enclosing a circular space like a bunker. Above the walls of James Perkins’s set, sits a heavy, circular, concrete coronet  The two beds look like prison issue with their black metal frames and grey rough blankets.

As Ben, Alec Newman has the less likable role, an older, ostensibly the more confident man who orders Gus around or bullies him by deriding what Gus contributes, or pulls rank.  The arguments are about almost nothing but Ben chooses to make an issue about the semantics as to whether one lights the kettle or puts the kettle on.  I warmed more to Gus, found him likable,  and enjoyed his rhythmic responses to Ben’s analysis of one of the stories in his newspaper.

What this play does not have is Pinter’s habit of making working class people have a detailed conversation about something incongruous like lace making or flower arranging. The closest we get to this absurdist conversation is in Gus’s description of the black and white crockery he discovers in the otherwise ill-equipped kitchen.

Ben uses Gus to do things first, to open the envelope which is slid under the door in a stiflingly, breath holding minute, or to read the note which comes down on the dumb waiter with a bang and a clatter, apparently behind a fixed chimney piece.  Both the envelope and the arrival of the empty food elevator are like components in a ghost story.

The envelope contains matches but doesn’t progress to fulfil Ben and Gus’s desire for a cup of tea. There’s either no gas or no kettle so this is a non-starter.  Director Alice Hamilton is making history here at the splendidly covid cleaned, distanced and ventilated Hampstead Theatre by producing this play 60 years after it premiered at the Hampstead Theatre Club, played alongside Pinter’s The Room before transferring to the Royal Court.  What she has done is to accurately let Pinter’s text take centre stage, the pauses, the beats are his, not directorial or actor discretion.

Running Time: 55 minutes without an interval 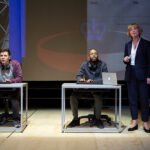