Nicholas Hytner's first Shakespearean play at his new theatre immerses the audience in the thrilling enactment of the murder...

“How many ages hence
Shall this our lofty scene be acted over,
In states unborn, and accents yet unknown?”
Cassius

The big news for Nicholas Hytner’s first Shakespearean production in his new theatre, The Bridge, is in the staging, turning his flexible space into a Globe like Pit, by taking out the downstairs seats and leaving the seated spaces in the galleries upstairs.  For the two hours without interval, the groundlings will stand as the crowd being swayed by the political speeches of Brutus (Ben Whishaw) and Mark Antony (David Morrissey) or as the inhabitants of the battle scenes at Philippi.

A loud rock band entertains the crowd as they enter and, as the lead singer, I spot Abraham Popoola who was the magnificent Othello in the Tobacco Factory’s production last year and who here also plays Trebonius, one of the assassins of Julius Caesar (David Calder). The rock band gets everyone into celebratory mood to welcome Julius Caesar back to Rome as they sell baseball caps and other souvenirs of the occasion in this modern dress production.

Mark Antony checks out the dais with his name emblazoned in red on the back of his black jacket like a boxer.   Morrissey is a tad portly to be playing the athlete but his total sycophancy towards Caesar firmly places the nobler Brutus as the hero of this production. And Ben Whishaw is as sympathetic a Brutus as you could hope to encounter, a genuine supporter of the Roman republic. However the casting is dead right with Michelle Fairley playing the leanly described Cassius.   There is a different emphasis when Caesar says, “Let me have MEN around me that are fat.”   All the hes and his and hims have been changed to she and her and hers to accommodate women actors playing males.   Outstanding is another woman, Adjoa Andoh as the envious Casca who fumes and plots with sheer venom in her wide eyed gaze.

Bunny Christie’s set sees the shape and height of areas change and shift and stewards have to marshal the crowds out of the way. During the play there was a medical emergency as a woman collapsed and the play had to be halted which meant that, on this occasion, the play well overran its intended two hours. This was in the scene where Cassius and Casca meet in a glass and steel structure that reminded me of a bus shelter.

The production has much of the spectacular, a huge red sheet with a golden Roman eagle is stretched over the groundlings. Mark Antony takes part in Caesar’s arrival at the Senate with lots of manly shoulder slapping as Julius Caesar, ignoring the warnings about the Ides of March, is raised on a throne surrounded by red carpet and with two huge red flags on one of Bunny Christie devices for raising big blocks of the stage.

The murder of Caesar is carried out by a motley group of assassins with revolvers, Brutus shooting last for Caesar to say, “Et Tu, Brute.” The ritual of the assassins dipping their arms up to their elbows in dead Caesar’s blood is gory, more awkward when they are wearing raincoats and jackets and not togas.   The instructions to Mark Antony from Brutus, “You shall not in the funeral speech blame us” sounded unbelievably modern and I had to check that the words are indeed Shakespeare’s. The staging gives a good idea of the way in which the mob can be manipulated with photocopies of Caesar raining down to be held up by supporters and poor Cinna the Poet (Fred Fergus) torn apart, mistaken for the other Cinna the conspirator.

The pre-battle scenes see Brutus and Cassius squabbling with Brutus accusing Cassius of having “an itchy palm”. They argue like an old married couple.  As the battle gets under way huge metal wheeled trucks, containing red hot glowing ambers, arrive and we see the battle lines drawn in cross timbers and barbed wire.

There is the sound and lighting flashes of explosions and ash falls from the ceiling.  Cassius dies first and then Brutus gets his servant to shoot him.  Mark Antony arrives in victory on a tank but it might have been a jeep.

I normally find the battle scenes of Julius Caesar rather tedious and less interesting that the first half of the play but not this, Nicholas Hytner’s exciting recreation of modern warfare, but my allegiance is cheaply bought, although this staging must be very expensive.

This Julius Caesar with the magnificent self effacing Whishaw as Brutus is one that will be talked about for a very long time.  Classical scholar Mary Beard makes the point in the programme, “The assassins may have imagined that they were saving Rome from one man rule.  In fact, their deed led directly to a series of civil wars that brought about exactly that: one-man rule for the rest of Roman time.” 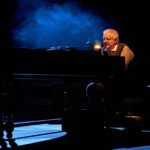