“People I work with, live with, grew up with—us, we’ve got no culture.”
Rita

It is hard to believe Educating Rita is 40 years old but it’s continuing to please audiences because of Willy Russell’s gentle humour. Willy Russell is best known theatrically for the musical Blood Brothers which ran so long at the Phoenix theatre that it was said that the phoenix obviously had been reborn.

Educating Rita had embarked on its 40th year tour earlier this year but was halted by the coronavirus pandemic.  It was due to come to the Rose theatre in Kingston upon Thames in late March and is actually there now 7 months later,  having appeared in the spectacular, clifftop, outdoor Minack Theatre in Cornwall for most of August, waiting for the indoor theatres to get up to speed on Covid measures.

We’re told that Willy Russell had rewritten some of the text for the Cornish production and unless he was explaining why the lecturer could see the sea out of his window in his study,  I suspect that the resulting text is what we’re getting at the Rose in Kingston.

The scenario is this.  Frank is a whisky soaked, middle aged lecturer in English literature in a red brick university in Liverpool.  His student Rita is a hairdresser with little or no education.  Rita has enrolled on a pre-university course for those with no qualifications, run by the Open University.  This experience echoes Willy Russell’s own, yes he was a hairdresser, of trying to get a university education and the grant to study at this level at a more advanced age.  It is hard to believe that the Open University would shell out for one-to-one tuition for someone like Rita even in 1980, but we can be certain nowadays that she would be sharing a half hour Zoom tutorial with 28 other students!

That Frank is seeking to impart his knowledge to an impressionable student is a load of guff.  He is in fact doing it for the money.  Like the woman on a birthday card I received which said “When I read about how bad drink is for you,  I decided to give up . . . . . reading,”  Frank gave up writing poetry after a put down from his then soon-to-be, ex-wife.

As Frank picks up Howards End,  the first set book for Rita and mentions its author EM Forster, Rita says,  “Forced her?   To do what?”   She comes back the following week and says, “It was a really crap book.”  Rita’s literary criticism consists of a political judgement of the middle class characters in Howards End and their privileged lifestyle.

What happens over the next few weeks of tutorials is that Rita’s freshness of approach serves to engage Frank but he doesn’t stop self-medicating with whisky.  Rita’s analysis of Macbeth in soap opera terms is exciting as she starts to discover live theatre.

I have seen this theatre set of very tall bookcases before on several occasions, but I don’t remember finding half bottles of the Famous Grouse concealed behind books on almost every shelf.  It is Rita who makes the journey in the play from loud mouthed Liver Bird to an enthusiastic student taking part in the famous OU summer schools.  Her whole dress style changes from very loud geometric jumpers and patent heels to pastel dungarees, as she fits in with other students.

Willy Russell’s one liners are second to none and make you smile if not laugh out loud.  I can’t help thinking how much more expensive a university education is now than in 1980 but it is true that you never forget a good teacher.

Stephen Tompkinson is perfectly cast as the languid alcoholic lecturer sorely in need of a sabbatical but it is Rita who refreshes him.  Jessica Johnson as Rita starts with a broad Liverpudlian accent but as her literary tastes become more sophisticated, her accent mellows. While there is undoubtedly affection between Frank and Rita, they didn’t strike me as having any sexual chemistry.

When after the summer school Frank asks Rita what she thinks of Ferlinghetti and she replies it’s alright with a bit of parmesan cheese, we now know she’s winding him up.  Like Shaw’s Eliza Doolittle it’s hard to believe that Rita will be able to go back to being a Liverpudlian hairdresser and wife having been introduced to English literature.   Perhaps like Shirley she will go to Greece?

Running Time: One hour 30 minutes  without an interval

Reviewed by Lizzie Loveridge at the Rose 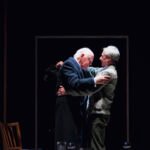