“The leading lady may be singing about black people’s blues, but the black faces always remain in the chorus line.”

Written in the 1970s and played at Hampstead Theatre in 1975, Alfred Fagon’s The Death of a Black Man has many and complex themes.   With Dawn Walton’s exquisite direction, this is a play that will make you think and think deeply.

Its very title would have conjured up then, as it does now, the unnecessary death of a man in custody or at the hands of the police.  Although in the play there is the death of Shakie (Nickcolia King-N’da)’s father, a jazz musician in Manchester, the title The Death of a Black Man may be a metaphor.  Shakie’s friend says, “He died in the gutter like a dog.”

In a tragic case of life imitating art, the playwright Alfred Fagon died in 1986 of a heart attack while jogging.  Two weeks later the BBC contacted his agent to say that Mr Fagon hadn’t turned up for his acting role in a play.  The policeman sent to his address had failed to find any evidence of friends or relatives and Fagon had been given a pauper’s funeral and his ashes already scattered anonymously.

Shock at this lack of a funeral, resulted in donations in his memory being set up to fund the annual Alfred Fagon award to Black British writers for the Best New Play.  In the St Paul’s area of Bristol, where he lived, there is a statue to him, sadly damaged in 2020 and assumed to be a racist response to the sinking of the statue of the slave trader Edward Colston.  In fact this was a misunderstood effort by an admirer of Fagon, to clean the statue just four days after Colston’s effigy’s ignominious drowning.

There is soulful jazz music. The play opens in 1973 when Sir Garfield Sobers is thrashing the England cricket team, hitting sixes.  The cricket scoreboard serves as the back curtain. Anyone who has seen the Windies play at the Oval will know the amazing atmosphere where half of Brixton is in attendance. They used to arrive with ghetto blasters and tune them to BBC Sports radio commentary so everyone can turn off  their “walkmen” and transistor radios.

Shakie talks about the beginnings of the Notting Hill Carnival which started as a static festival with steel bands playing underneath the newly constructed Westway off Ladbroke Grove.   In the 70s the West Indians in Britain are succeeding in cricket, sport and their cultural heritage is contributing to British society and there are fledgling black businesses.

Shakie is just 18 and a successful entrepreneur in African arts and crafts.  He is selling, in the King’s Road, African style wooden chairs, to rich American tourists, which are made by black carpenters in Yorkshire.  He buys them for a few hundred and sells for thousands and his profits mean he owns his Chelsea flat.  Jackie (Natalie Simpson) arrives from out of town.  She has a two year old daughter Priscilla, the result of an affair with Shakie when he was 15 and she was 28.  He told her he was 21.

Shakie and Jackie bicker about  their past but Shakie calls her “my baby mother”.  They drink champagne and dance.  Shakie’s friend Stumpie (Toyin Omari-Kinch) arrives back from Germany where he has been trying to reclaim black music and promote it to black people.  Stumpie wants Shakie to bank roll his venture but Shakie rejects it as unlikely to be profitable.  Shakie’s chairs business hits a problem and he starts to explore other money making but exploitative ideas.

Here is another theme: in the decade before the Yuppies soared financially, if you make money does it have to be at the expense of someone else?  It is difficult to like these characters if you also judge them.  Jackie is unknowingly a paedophile, exposed by the newspapers, when at 28, she sues for maintenance and discovers the father of her baby is 15.  Jackie also tells lies. Stumpie is full of hatred and shockingly violent.  He doesn’t like white people, he doesn’t like middle class black people.  Shakie’s desire for money overrides any moral compass he may have.  In his words, “There is no wrong or right left in this world. Just grab what you can get.”

Toyin Omari-Kinch as Stumpie switches frequently between using a Jamaican accent and a cockney one, I am assuming this is a director’s choice?  It would seem to imply he is the first generation of Black British having almost lost the cultural heritage of the West Indies and yet not assimilated into Black British culture.

You will be able to tell how superb and convincing the acting is of this well written 50 year old play from the detailed characterisation.  Natalie Simpson’s performance as Jackie is affecting.   Simon Kenny’s seventies brown leather dominated flat set changes after the interval, opening up.   Shakie’s business suit is in the colours of Barclays Bank!

Credit goes to Dawn Walton’s shrewd production.  The finale of the play descends into misogyny, sexploitation and tragedy.  As Jackie says “If black men are suffering, then what is happening to black women?”

The Death of a Black Man
Written by Alfred Fagon

Reviewed by Lizzie Loveridge at Hampstead on 3rd June 2021 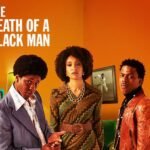 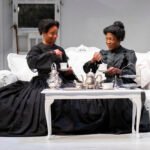