AN Wilson on Greene’s trip to see Philby, Daily Mail 1987

The quote “a splinter of ice” is so relevant to the culmination of the story of Kim Philby (Stephen Boxer) that I feel I cannot reveal it in this review.  There is renewed interest in the UK in John Le Carré’s spy novels after his death last December.  The BBC serialisation of Tinker Tailor Soldier Spy is reshown as the BBC search for popular programmes from the past, as covid prevents new ones being made.

Also in 2020 secret files were released to the National Archive with details as to how the British Government had covered up Philby’s defection.

David Cornwell (Le Carré was his pen name)’s own career as a British secret agent was terminated by Kim Philby’s defecting to the USSR in 1963 and taking with him the names of all the British agents in Eastern Europe which led to many of them being executed.

Ben Brown’s excellent play takes place in Moscow on 15th February 1987 when the novelist and ex-M16 operative, Graham Greene is visiting Kim Philby who defected from Beirut in January 1963.

Philby and Greene were colleagues, although like Le Carré, Greene’s M16 career was halted as his name was given to the Soviets by Philby.  However as Brown’s play tells, Greene had a certain amount of sympathy for Philby’s devotion to Communism.  The programme uses a quote from Robert Browning: “Our interest’s on the dangerous edge of things.  The honest thief, the tender murderer…. ”  He could have added the charming spy.

I was at school in Cambridge and I remember a school friend whose brother was named Guy Anthony. Their father was in the Foreign Office. Her brother’s godfathers were Guy Burgess and Sir Anthony Blunt, Master of the Queen’s Pictures.  Burgess defected with Donald Maclean in 1951 before I was at school.  Anthony Blunt has had his knighthood removed and was granted immunity from prosecution but his spying was revealed by the then Prime Minister Margaret Thatcher in 1987.

Philby, Burgess, Maclean, Blunt were four of the notorious Cambridge Five.  All are mentioned in the play as Philby tells his life story to Greene.

These men had been recruited at Cambridge in the 1930s when the Hunger Marchers from Jarrow passed through Cambridge and received support.

Philby and Maclean discuss the book and film of Greene’s novel, The Third Man.  Philby is convinced that he is the model for Harry Lime as his name before Kim was Harold, long for Harry.  Greene trumps him with the reminder that that his full name was Henry Graham Greene, Harry being short for Henry and that Lime is a shade of green.

Their conversation is fascinating.  Philby has received many awards from the USSR and never once questions the atrocities carried out under Stalin, or Stalin’s pact with Hitler, and we wonder whether Greene’s affection for Philby is unaffected after this encounter.  The play will also question Greene’s motives for this visit.

Rufa, Philby’s fourth wife (Karen Ascoe) will talk with Greene while Philby cooks in the kitchen and fill in more of the details of Philby’s first three wives and their relationship with the Blakes (George Blake was another British spy) and they talk about the rift with Maclean after Philby had an affair with Maclean’s American wife Melinda.

Michael Pavelka’s set is full of G Plan type furniture so different from what would have been Philby’s lifestyle in England.  Philby tells us that the upholstered, fireside chair was bequeathed to him by Guy Burgess.

Boxer and Ford Davies are so comfortable in their roles, it is a pleasure to see such assured, experienced actors and Alan Strachan’s direction is highly skilled.

If you can’t get to see this splendid play on tour, then access it online until 31st July.  Read the playscript published by Faber.  I also listened to the BBC Sounds programme, The Philby Tape, of him discussing his career with the East German Stasi in 1981, which has surfaced in the last five years in the BBC archives.  This tape shows Philby’s absolute confidence that what he did was right or could he be lying to himself?  The tape reveals his upper class accent, which sounds not unlike Prince Charles.

A Splinter of Ice

Running Time: One hour 45 minutes with one interval

Reviewed by Lizzie Loveridge at the Yvonne Arnaud Theatre 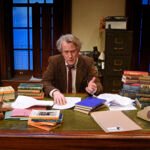