The production has been designed as a space where women and girls over 18 can feel safe and empowered and they are there in posh frocks, with sashes saying Birthday Girl,  dolled up to the nines and ready to cheer and laugh and scream.  You enter the Hippodrome in Leicester Square and go up to the First Floor, the age restriction being about alcohol and the Casino area you walk past, where croupiers play Roulette, Chemin de Fer and Black Jack.

The orange Aperol cocktails will come in glasses that look like rose bowls and the prosecco is really unlimited, if that is what has been promised!  And I didn’t have a hangover!  The waiters will watch for alcohol over-consumption and although we saw lots of excitement, there was no drunkenness or people staggering around being sick.

Channing Tatum, an American actor and dancer is the show’s inspiration and many of the cast have trained in ballet or musical theatre.  A girl compere (Sophie Linder-Lee) kills off the costumed Village People, and the blue suited angry MC who has been as offensive as possible to many.  We are so grateful to see him go!  That was my first cheer of the night! The guys in costumes are replaced by the dance troupe in tee shirts and jeans so we can fantasise about bumping into them on the streets of London rather than at the Fire Station in brown and banana uniforms with hoses.

Dancers will appear at the balcony level, sashaying on a rope back to ground level.  The balcony will open mechanically to form a stairway and the dancers will line it wearing suits.  A table will open up into a keyboard for dancer Jack Manley to play and other dancers will play instruments, guitars, while psychedelic projections light up the backdrop.  The lighting is clever and well executed;  at one point a dancer has intricate tattoos projected onto his bare chest and arms.

The floor staff explained that the table we sat at would be used in the show and said that we would need to hold our glasses while a dancer used the table to dance.  Glad we hadn’t ordered the extra large Aperol!  A floor manager would tell what they wanted us to do.  I was really impressed by the politeness and care from the waiters and front of house staff.  We were happy to slightly shift to allow a dancer to come down from the balcony, on a rope in between us.  Taigo was our extremely considerate and charming waiter.

Harry Carter will eat fire while the lit backdrop is giant lipstick lips.  Mike is becoming more skilled in seduction.  He’ll make a beautiful speech to Louise but spoil it, by delivering a facial squirm as he turns away from her.  The audience get out today’s equivalent of pop concert lighters with the torches lit on their phones, to accompany Ed Sheeran’s song “Thinking Out Loud.”  There is real rain in the centre and Mike will graduate with a balletic, wet sex dance with a girl ballerina (Josie Scammell) on a see through platform above the stage.   Ross Sands who plays Mike is also the dance captain.

A flamenco finale has red costumed dancers on a trapeze held by spinning plaited ropes with red roses decorating the aerialist act.

Well that is one ticked off the bucket list and what a pleasure it was!

Conceived and Directed by Channing Tatum and Reid Carolin

Reviewed by Lizzie Loveridge at the Hippodrome on 1st July 2021 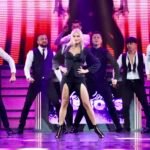