I’ve never seen it yet to fail

A girl who’s in love with a virtuous man

Is doomed to weep and wail

Stonecutters cut it on stone

Woodpeckers peck it on wood

There’s nothin’ so bad for a woman

As a man who thinks he’s good!

I’ve never seen it yet to fail

A girl who’s in love with any man

Is doomed to weep and wail.

Carrie and the Girls

The clock just takes your life away

There’s no relief in sight

An’ God knows what in all night!

In his production of Carousel at The Open Air, Timothy Sheader has decided to revert to the 1945 ending which Rodgers and Hammerstein rewrote.  Since then Carousel‘s harsh plot has been prettified.

The original short story was by Hungarian Ferenc Molnar who extended his story to create the stage play Liliom in 1909.  Molnar turned down Puccini’s offer to turn Liliom into an opera because he wanted his play to be seen as a play.

Liliom was set around Hell where a fairground barker kills himself after a failed robbery and after 16 years in Purgatory is allowed to return to Earth in order to do a good deed for his now teenage daughter.  If he fails he will go to Hell but if he succeeds he will enter Heaven.

Rodgers and Hammerstein set their musical in 1870s New England’s whaling community with the characters mostly mill or factory workers and whaler fishermen.  At the Open Air the cast are allowed to use their normal English accents but if we are to be in a whaling community, and eat a clam bake, we are firmly still in New England, although the idea was to set the musical in a place and time closer to the current audience.  Surely this has to be a good decision rather than saddling the cast with American accents as well as having to sing, dance and act?  Could this be called accent blind?

The plot aside, there are three outstanding reasons for seeing this gritty production of Carousel.  Top has to be the fabulous tunes one of which will be known by everyone in the UK, Liverpool Football Club’s stirring anthem “You’ll Never Walk Alone” sung here by the excellent Joanna Riding.  The other really well known songs are the “Carousel Waltz” heard at every fairground, the duet “If I Loved You”, “When The Children Are Asleep” and the celebratory “June Is Busting Out All Over.”

Secondly are the new orchestrations for the score with their emphasis on the Northern community brass bands, and electric guitars, from Tom Deering who also orchestrated Jesus Christ Superstar for the Open Air.  These are very different from the soaring strings of the film of Carousel and have validity in this labouring community.

Thirdly, and almost most importantly, there is Drew McOnie’s astounding and meaningful choreography.  He has taken on board the occupations of these whalers and labourers and his dance is full of muscular exertion and hard work, amazing leaps and jaw dropping pirouettes.  The women haul laundry baskets but dance in pairs with the men controlling them.  The men dance earthily to “Blow High, Blow Low” with water droplets thrown over each other, and picked up by the lights in an image I shall never forget.  Johan Persson’s production photographs capture this exceptional dance.

Tom Scutt’s colour palette is soft hues of muted, dulled pastels, greys, greens and fawns which has a real impact compared to the fairground brights of usual Carousels.  The carousel here is imaginary, twisting poles standing in series on the turntable stage.   Declan Bennett as Billy Bigelow sings and plays his banjo and we can believe why Julie Jordan (Carly Bawden)’s family feel he isn’t a good match for their daughter.  We long for him to swallow his pride and go back to work on the Carousel but he shocks us when he hits out at his wife, striking her in the face.  It is a shocking moment.  Julie’s excuses for Billy’s wife beating don’t convince in the 21st century nor should they have in the 19th century! Carly Bawden and Declan Bennett as Billy and Julie sing beautifully in the duet “If I Loved You” a pretty tune but decidedly from the 1940s.  You’d have trouble finding lyrics as sexist as Billy’s “Solilioquy” when he plans what he would do with his son and then thinks the baby might be a girl,

“You can have fun with a son
But you gotta be a father to a girl
She mightn’t be so bad at that
A kid with ribbons in her hair!
A kind o’ sweet and petite
Little tin-type of her mother!”

I liked Julie’s interaction with her friend Carrie Pipperidge (Christina Modestou) and Carrie’s boyfriend, later husband and father of many Enoch Snow (John Pfumojena) as they lead the comedy.

After the failed robbery, rather than go to prison Billy kills himself and is given the opportunity to repair the damage he’s done by one good deed. However we are told that each minute in this waiting place is the equivalent of one year on earth.  Billy returns after 16 years which presumably is a wait of 16 minutes and hardly long enough to reflect on what he has done wrong!

His actions back on earth are cataclysmic for him and for the audience.

Bravo! Timothy Sheader for trying something different with Carousel and please can we see more from Drew McOnie’s heart grabbing dance!

If I Loved You

June is Bustin’ Out All Over

When the Children are Asleep

Geraniums in the Winter/Stonecutters Cut It on Stone

What’s the Use of Wond’ring

If I Loved You (reprise) 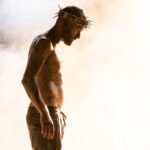 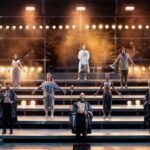