A Twelfth Night with the comedy as its strength

“If this were play’d upon a stage now, I could condemn it as an
improbable fiction.”
Fabian

In one of the most lively productions of Twelfth Night, Sean Holmes brings the Tudor Comedy, which can often be rather laboured, to life.  I always enjoy Andrew Aguecheek (George Fouracres)’s line the rather mournful, “I was adored once too!” and the dance scene with Sir Toby (here the brilliant Nadine Higgin).

The enjoyment of these scenes rather skews the main matter of the play with Orsino (Bryan Dick) taking rather a back seat while we can enjoy Olivia (Shona Babayemi)’s interaction with Cesario who is really Viola (Michelle Terry).  In Shakespeare’s day, Viola would have been played by a boy who would then act as a girl, Viola, only to move on to being Cesario, a boy.  Here Viola is acted by a girl masquerading as Cesario, Orsino’s page.  Certainly I preferred Michelle Terry to be shot of the dreadful wig, not improved by Viola’s near drowning.

I love the music in Twelfth Night,  Feste (Victoria Elliott)’s songs are beautiful especially the tragic “Come away, come away, death, And in sad cypress let me be laid; Fly away, fly away breath; I am slain by a fair cruel maid.” and I like them sung by a female voice.

Malvolio (Sophie Russell) appears with an Elvis haircut but the designer’s interpretation of yellow and cross gartered has to be seen to be believed.  No spoilers here!

Some of the design I hated, especially the dripping blood deer hung onstage with little purpose other than to throw a bucket of blood over Malvolio in his underground prison.  I found myself squirming like a vegan each time I caught sight of it.  The set was quite frankly strange: a Welcome to Illyria lit up sign with a huge arrow and the lone tiger seat ride from a seaside carousel.  Old cars and car parts spilled into the Pit playing area and there is strategically placed tumbleweed, but why?  Jean Chan’s designs seemed to ask more irrelevant questions than to illustrate Illyria.  I would call this designer’s conceit.

Orsino seemed to wear Wild West gear and the constable was dressed as an American cop but Viola and Sebastian (Ciaran O’Brien) were in full Tudor breeches and jackets.

The star of this play for me was Nadine Higgin’s Sir Toby Belch.  She has magnificent stage presence.  I do wonder whether we are meant to like Sir Toby as much as we did?  But I loved every moment she was onstage and her interaction with Maria (NadiKemp-Sayfi) was brilliant.  “Here comes the trout that must be caught with tickling” says Maria as Malvolio approaches.

Of course there are strong performances from the Globe’s Artistic Director Michelle Terry as Viola and I really liked  Shona Babayemi’s stately Olivia.

It was good to see some groundlings back at the Globe, standing in the Pit but not yet up to full capacity.  If you don’t know the play, this production may not be the best introduction to it but you’ll laugh!

Reviewed by Lizzie Loveridge at the Globe on 6th August 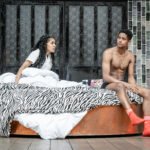