Jersey Boys come back to London for their tenth year!

Into the splendidly renovated Trafalgar Theatre, removing the design choice of the late 90s to turn the Whitehall Theatre into two smaller spaces called Trafalgar Studios by just using the circle and upper circle for the main theatre.  They created a steep auditorium where every seat had a good view, that is if you could escape the vertigo and negotiate the almost dangerous steps!

The new architects have got it right.  The seats are more comfortable and have arm rests and the theatre is returned to its original proscenium arch design.  The art deco detailing looks lovely.  Sadly The Other Palace was modelled on a similar premise copying Trafalgar Studios. So it is a joy to see Jersey Boys back here in London after a four year hiatus after it closed in 2017.

It is remarkable that the Four Seasons and Frankie Valli were in the hit parade when Britain was in the grip of The Beatles, the Liverpool groups and The Rolling Stones in 1963.  Although Jersey Boys is a musical made up of a back catalogue, and what a back catalogue it is, it has a good content of interesting biographical detail about these remarkable singers which drives the show.

Tommy De Vito (Benjamin Yates) is the driving force getting the group together and recruiting the amazing Frankie Castelluccio (Ben Joyce) with his incredible falsetto voice.  He changed his name to Frankie Valley and later to the more Italian ending Valli after a Texan hillbilly singer, Jean Valli.  Their first group, the Variety Trio is with Tommy and his brother Nick De Vito and Nick Macioci later Nick Massi (Karl James Wilson).  Nick De Vito drops out as he serves a prison sentence for a series of petty thefts.

Valli’s cut his first recorded single “My Mother’s Eyes” in 1953 as Frankie Valley.  In the late 50s, song writer Bob Gaudio (Adam Bailey) joins them and in 1960 they rename themselves, The Four Seasons after a bowling alley in Union, New Jersey where they auditioned in the cocktail lounge.  Mobster Angelo ‘”Gyp” DeCarlo (Mark Isherwood) is portrayed in the show as being particularly fond of Frankie singing “My Mother’s Eyes” and is sentimentally tearful when he hears it.

Jersey Boys  does not gloss over the more unsavoury aspects of De Vito and Massi’s time in prison for burglary.  Of course most of the bars where they performed were owned by the Mafia.  Things come to a crisis with De Vito’s gambling debts and the money owed in taxes and Valli undertakes to pay it all and does so.

I loved the presentation of Jersey Boys, the wire grids on stage and behind a projection of the New Jersey ugly sky line, with pylons and water towers in the distance.  Michael Clark’s projections include the signs for the places they played at and, most attractive of all, there are Roy Lichtenstein type cartoons to illustrate “Big Girls Don’t Cry” and “Walk Like A Man”.  Roy Lichtenstein’s work was exactly of that era.  The late Howell Binkley’s lighting adds to the show’s excitement.

Meeting Bob Gaudio and his music is most interesting.  At 15 he wrote the single “Short Shorts” and in the show he joins on the strength of Frankie’s remarkable voice and later, the only contract between them is a handshake.  Nick Massi provided the bass vocals, played the bass guitar and wrote most of the group’s vocal arrangements.

Many of the lyrics were written by record producer Bob Crewe (Ben Irish) who jointly with Bob Gaudio wrote ten hits for the Four Seasons. The Four Seasons’ first big hit is “Sherry” written by Bob Gaudio and produced by Bob Crewe, who after hearing Frankie Valli sing, told Bob Gaudio to write something that jumped an octave.  Bob Gaudio was often on the keyboard. You can see there is enough story for these guys to keep you absorbed between the inspiring musical numbers.

Jersey Boys  is the show people come to in order to hear fine reproduction of the original songs and Bob Joyce as Frankie, just graduated from Mountview Academy in North London, is a sensation.

It is a show that generates plenty of repeat business as people return in the way that they did for Buddy, the show about Buddy Holly.  It is running at the Trafalgar just into 2022 but another cast is on tour in the UK.

The choreography is distinctive and of the dad dance era but you will marvel at the energy of this young cast to sing and dance to so many tunes for two and a half hours.  Jersey Boys is real value for money in musical theatre with enjoyment and thrills.

Ces Soirees-La (Oh What a Night)

You’re the Apple of My Eye

I Can’t Give You Anything But Love

My Eyes Adored You

Can’t Take My Eyes Off of You

Working My Way Back to You

The Story of The Four Seasons

Running Time: Two hours and 35 minutes with an interval 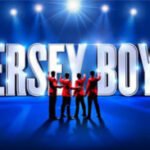