“That Christie dame made more money out of murder than we ever did,”

Don’t go to see this play in the company of a criminal lawyer. They may fidget, scoff, snort and snigger. And they have a point, since the action begins with a leading QC, Sir Wilfrid Robarts taking on the case of penniless murder suspect Leonard Vole, who can’t possibly afford the great man’s fees. And that’s before we get to the courtroom banter.

My learned friend Ms Loveridge has already introduced Witness for the Prosecution in her notice. It is of course an Agatha Christie murder mystery but this time there is no amiably eccentric amateur sleuth to solve the case. It is down to the British judicial process. And You too, members of the Audience. So pay attention, if you care to have a go.

But while the Council Chamber has something of the intimidating majesty of a high court its acoustics can be a problem. It is also, in effect, a thrust stage so the actors’ expressions are not always visible. This is not always kind to the dialogue, which is crucial for this exposition-heavy play. My companion may not have been the only one to miss the key statement in the denouement on which the whole play turns. This might pose a problem for some long-term Christie fans, though they are probably familiar with the plot anyway.

Pace is another issue. An unsolved murder demands resolution which, delayed, creates suspense. But after a gripping nightmare start Witness can seem to plod, even in the courtroom scene, so that the Witness’s bombshell is very welcome by the time it does explode. By way of contrast the second half finale is such a breathless dash to the finishing line that it may seem perfunctory.

Along the way we are treated to spirited performances. The casual way Emer McDaid’s Romaine Vole steals a cigarette from Sir Wilfrid tells us what a wrong’un she is and her accent is a master class in doing the quintessential European femme fatale. Joe McNamara’s Leonard Vole is a man on the edge in more ways than one. Jonathan Firth’s Sir Wilfrid is a master of words but it is his face that shows his torment when his courtroom victory turns out to be… anything but.

There are cherishable cameos from the supporting cast. Elana Martin channels Barbara Windsor at her most cheeky. Yvonne Gidden, as the dead woman’s housekeeper, gives full force to: “What hypocrites you are in this country!” Lorna Lowe is the court stenographer who spends half the play typing as coolly as if she is piloting the Starship Enterprise through a deadly meteor storm. Martin Turner’s drier than an empty sherry bottle Judge feeds the line: “What is a cat comb?” to Vole’s inevitable reply, “A comb for combing cats, your honour.” Perhaps too strong a touch of Peter Cook for this point in the action.

Of course Witness for the Prosecution seems to reflect the elitist values of another time. Women are weak. Foreigners are dodgy. The lower orders need to be kept in their place. We are blessed in having a professional class able to manage the affairs of state. Or do we?

At the core of the play is the tragic revelation of the flaws of a leading character. Someone who is forced to realise that their confidence and authority are unearned and rest on dangerously shallow assumptions.

Agatha Christie may not mean to send a message, but this one emerges from her fascination with deception and deceivers. And in this play she sets out to deceive us. And does she? You judge. I won’t say more than,

No butlers are harmed, or cause harm, in the course of this entertainment. 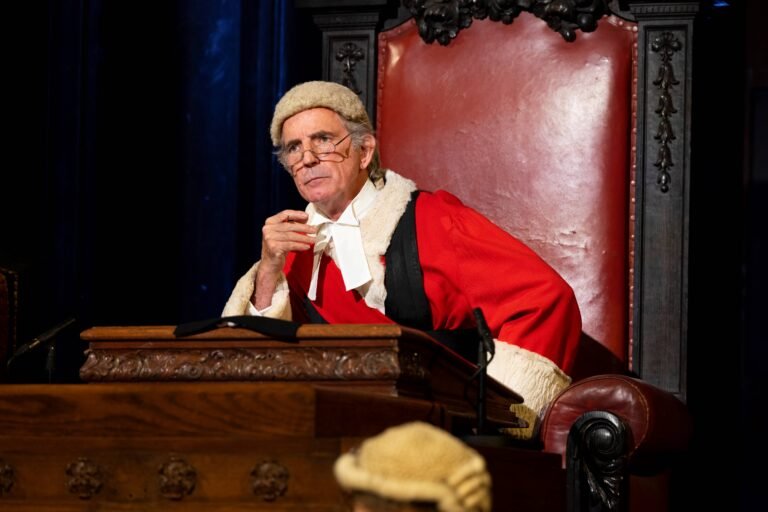 Witness for the Prosecution

REVIEW: Witness for the Prosecution at County Hall continues from 14th September 2021