17 minutes from Caryl Churchill,
the Picasso of theatre makers 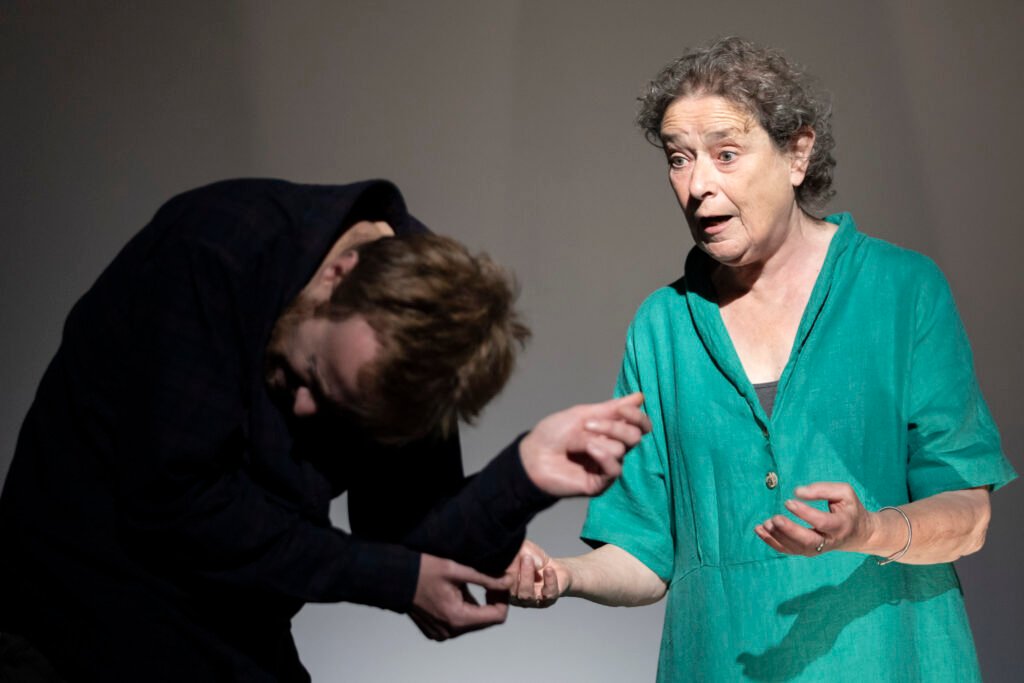 Andy Warhol has a lot to answer for.  It is often misattributed to him that he invented the term “fifteen minutes of fame” but he is quoted as saying, “In the future, everyone will be world-famous for 15 minutes.”  According to him, this was the tawdry stand-in for a reputation of solid worth and typified an era hooked on ephemeral celebrity-worship.  The phrase quickly leapt niche-ward and became a mantra of the era.

Even without Andy getting up to his paradoxical tricks, quarter-hours have not latterly had a good press, viz “un mauvais quart d’heure“.  Lasting 17 minutes straight through, What If If Only – the latest piece by Caryl Churchill, is the polar opposite of “un mauvais quart d’heure”.  It packs a wealth of suggestion in its brief allotted span.  And the wonder of it is that it does so with an elating lightness of touch.

If the kind of cat that crouches on a witch’s broomstick could write plays, they could come out like the theatre piece by Churchill, who rightly is lauded as the Picasso of theatre makers for her capacity, she is now in her ninth decade, for continually reinventing herself.

They say that brevity is the soul of wit.  It is a ticklish business. though, knowing what to do with the programme/texts on these occasions.  I must confess that I have been known (out of nerves) to try to get in advance of the occasion by looking at the dialogue.  This is, so to speak, a false economy.  The trick is to whet the anticipation by having a quick look at the dramatis personae and at the cast of actors.

In the programme text of What If If Only, the former are intriguingly listed as:   SOMEONE/FUTURE/FUTURES/FUTURES/PRESENT/CHILD FUTURE.  Linda Bassett and John Heffernan carry the bulk of this three-hander and are renowned for their ability to get on Churchill’s wavelength.

Heffernan has a wonderful ability to suggest both quizzical, whizzing synapses and a nervous system that can register a deep pain such as the mind is powerless to ward off.  He is discovered talking to an evidently deceased lover in a way which implies that the so-called consolations of philosophy often fail to console.  There is a goblet of wine on the table at which he sits.

The build-up of grief behind this philosophical whimsy is superbly evoked, making it mount into sounding – increasingly and excruciatingly – like a defence against an utter breakdown.

The director is James Macdonald who once again serves Churchill immaculately.   The physical production is as defined as gleaming as a  tin-tack and as light as meringue.  Churchill’s imagination has worked before with death and its finalities and with what lies beyond – in terms of how we all (believers and non-believers) are left to cope with the idea of posterity.   There have been two developments and two complications since Here We Go  was beautifully staged in the Lyttelton by Dominic Cooke in 2015.  There’s the Covid Pandemic and there’s the threat that the human race will be wiped out by climate change.

Covid shadows all deaths now; some it has overshadowed.  And, apart from assorted diehard climate change-deniers, the future of the planet and animal life concerns us all, regardless of whatever views we may have about tactics of Extinction Rebellion.  In the hinterland of show, quite obviously, there lies Charles Dickens’s Christmas Carol, with its meliorist sequence – the Ghost of Christmas Past, the Ghost of Christmas Present and a transfiguring and transfigured vision of Christmas in the Future.

“I am the Ghost of a dead future,” announces the Linda Basset figure when she arrives.  Not the dead future.  It’s dead because it never happened – it is a potentiality only.  “Make me possible,” urges Basset with her matchless capacity of seeming encouraging and dangerous, focused and solicitous and yet as scatty and out to lunch as the Red and the White Queens in the Alice books. She is in a green shift when she enters Miriam Buether’s chaste, ectoplasmic-looking lift-up design.

The title also refers to the age-old question in epistemology and ethical enquiry.  It has been asked by everyone from the Socrates of Plato Dialogues to Davd Hare who used it as the title of a lecture.   In What If If Only, the phrase is calculatedly mangled:

“I’m a brilliant future you would really like, everyone would have liked me if I had happened.”

“Equality and cake and no bad bits at all and I’ve been glimpsed I’ve been died for in China and Russia and South America”.

As she demonstrated in her brilliant performance as Paulina in Dominic Cooke’s production of The Winter’s Tale for the RSC, Bassett possesses an uncanny talent for signalling that she is somehow in a play but not of it.

It’s a gift made use of again here as she and this Future could be both a Utopia and a nightmare roguishly wrapped up in one abortive non-happenstance.

What If If Only
Written by Caryl Churchill

Running Time: 17 minutes without an interval

but some 10pm performances

Reviewed by Paul Taylor at the Royal Court