“If only we had met years ago! I would have listened to my patient’s sins, then told them to fall to their knees and beg absolution. Psychoanalysis doesn’t profess the arrogance of religion, thank God.” 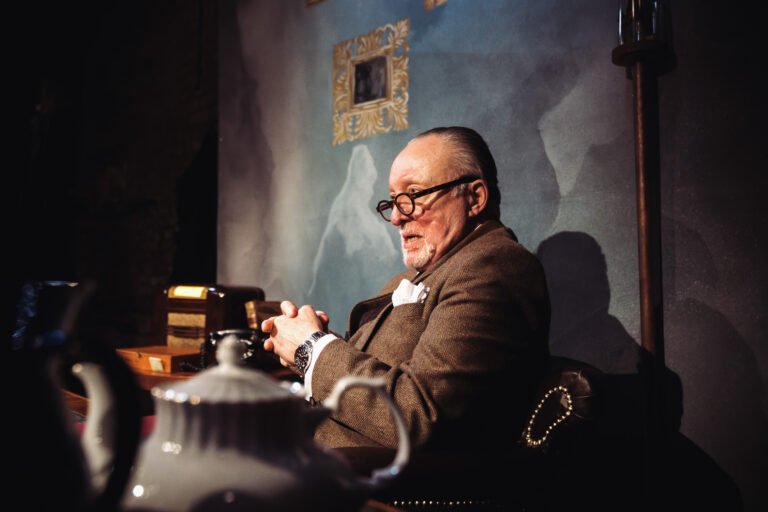 Freud’s Last Session has taken a remarkably long time to make its UK premiere after opening in the US at The Barrington Stage in 2009 and making its way to Off-Broadway.  Mark St Germain takes his inspiration from “The Question of God” by Dr. Armand M. Nicholi, Jr. and has the father of psychiatry, Sigmund Freud (Julian Bird) meeting Oxford academic, and more known for his seven Narnia novels, CS Lewis (Séan Browne).

It proved enduring in New York maybe because of the ratio of psychotherapists to theatre goers.

Set in London’s affluent Hampstead where Freud has come after escaping from Vienna, the play is set just as the Second World War starts to get under way.  Freud is listening to BBC Radio’s Home Service with announcements from the Prime Minister Neville Chamberlain and King George VI.  A practice air raid drill, which neither man was aware was a false alarm, has Freud staying where he is while Lewis looks for the location of the nearest air raid shelter.

This play is 85 minutes of debate with some humour but little dramatic action.  It is about ideas and argument not action.  Julian Bird is an actor and trained as a psychiatrist and portrays Sigmund Freud three weeks before he dies and when he is suffering from advanced mouth cancer.  Understandably this affliction makes him acerbic and prone to sarcasm and we do not warm to him until we appreciate what level of pain he is in.

Séan Browne as CS Lewis is 40 years old as opposed to Freud’s 83 years.  Lewis seems good natured, thinking that the meeting would be about a critical article he had written about Freud’s theories and expecting to be reprimanded.  Lewis has converted to Christianity after being an atheist in his 20s, partly through discussions with his Oxford colleague and friend JRR Tolkein.

Much of the debate centres on the figure of Jesus Christ.  Freud admits that Christ existed but not that he was the son of God.  “Why should I take Christ’s claim to be the Messiah more seriously than my half dozen patients who claim to be Christ?”  JRR Tolkein said ” ”Either this man was and is the Son of God, or else he is a liar, a lunatic or a fraud.”

Freud’s daughter Sophie was killed by Spanish Flu aged 16 and he talks about a grandson who died aged five and questions that if there was a god, why would he allow this?

The set is very detailed with a leather couch and in glass display jars some of the artefacts, many of them from world religions, that Freud collected.

I don’t think that arguments were powerful enough to challenge any of the audience’s existing beliefs.  Although the publicity says the performance is socially distanced, the only vacant seats are the front rows thereby reducing the overall capacity of the auditorium but not creating any distance between people.  In fact the seating was too close for comfort.

Running Time: One hour 25 minutes without an interval

Tube:  Not The Angel, suggest Highbury and Islington

Reviewed by Lizzie Loveridge at the King’s Head 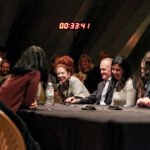