The Realities of War in France

“… the signs of war advance, No king of England, if not king of France. ”

What an historic moment to open a play about a country’s ruler laying claim to land he considers his country is entitled to?   Thankfully Putin isn’t claiming the Ukraine under Salic Law.

In Max Webster’s production of Henry V  at the Donmar Warehouse, the theme is modern military warfare.  Gone are the English longbows that won the Battle of Agincourt in 1415 inspiring the English rugby chant of Quatorze Quinze when playing against France.  Coming from the 15th century set Game of Thrones as Jon Snow, is Kit Harington to star as the monarch Henry V, who as Prince Hal cavorted with the low life of Eastcheap.

The rejection scene of Falstaff (Steven Meo) by Henry from Henry IV Part Two has been inserted into this production to clarify that the Prince has left behind his old comrades, along with the later hanging of Bardolph (Claire-Louise Cordwell) for war crimes.  It is of course Hal’s misspent youth which gives him the common touch and the ability to pass unrecognised among his soldiers with “a little touch of Harry in the night”.

An ex Marine Commando, Tom Leigh, has been brought onto the creative team to take the actors through the Marine’s Initial Military Fitness programme every morning.  And Gosh! They do look fit! Throughout the play the Movement Director Benoit Swan Pouffer has combined these authentic military moves with the fluidity of modern dance.  In between scenes we have powerful choral music with its stately and emotional setting.

The battles which are fought in modern battle dress with sub machine guns dominate this play about warfare.  The French do not escape derision as the Dauphin (Oliver Huband) praises his fashion item, his splendid horse.  With a difference, the French speak to each other in French with surtitles translating into English, although of course we know that the English court would also have been speaking in French in 1415!

The backdrop projects swirling, moving clouds and shadows in monochrome and at Harfleur the lighting changes to blood red. 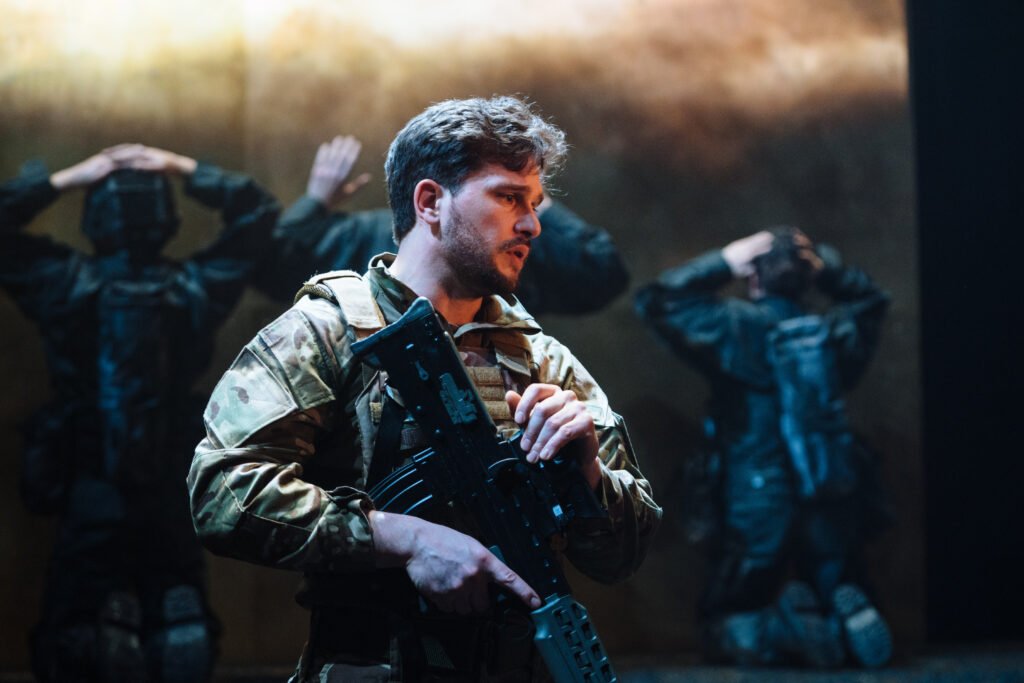 Kit Harington convinces as this famous monarch, who lived only seven years after Agincourt when he was 28 years old.  Unlike Olivier, Harington eschews the terrible haircut.  One of Shakespeare’s finest speeches is the St Crispin’s Day one with those phrases that mean so much about battlefield glory and army comradeship.  Even pacifists love Henry V!

Some of this production reminded me of Edward Hall’s RSC Henry V starring William Houston at the Barbican in 2001 with its partying soldiers and modern warfare.  In 2003 Adrian Lester played Henry V at the National directed by Nicholas Hytner for his inaugural direction with its anti-war theme.  That was the first time Henry V  had played at the National in 40 years.  One of the best I recall, was Jude Law directed by Michael Grandage in 2013, apart from Law’s choice of a south-east London accent. Michelle Terry did a fine job at the Open Air in 2016 directed by Robert Hastie.

Although an Associate Artistic Director at the Donmar, Max Webster directs Life of Pi currently at the Wyndham’s.  We shall see more of him.  Many people can see this sold out play when it is streamed by NT Live to cinemas in April 2022 and internationally from June 2022.

at the Donmar Warehouse