“We barristers just tell the best version of a client’s story. “

This 100 minute show is all Jodie Comer, enthralling as a young barrister from a working class background in Liverpool. In her room in chambers with walls lined with floor to ceiling bookcases filled with white loose leaf files, she wears a barrister’s horse hair wig and full robes.

She is Tessa Enslin and she confidently explains how good she is as a defence counsel in taking on clients accused of sexual assault.  Her self assurance has her climbing onto the desk and striding as she recreates her part in a case she has won at full volume.  “There’s blood in the water and the witness is swimming into it.”  She explains her lack of empathy for the aggrieved woman who has accused the man of rape. “It’s not emotional for me.  It’s the game!”

We briefly return to her home in Liverpool where her mother suggests her success will release more criminals on to the streets.  In a flash back to a lecture in Cambridge at the Law School, where they all have three A stars, a lecturer explains that there are no real truths, only legal truths.  You are “the crème de la crème” says the lecturer echoing Miss Jean Brodie.

Later she is accused of being arrogant as a barrister. “Yes we are!” she says throwing a wrapper on the floor. When questioned about her role in releasing the guilty, she says, “We barristers just tell the best version of a client’s story.”

A date with Julian, another barrister, whom she had sex with previously in his chambers, goes wrong when she gets very drunk and after sex, vomits in her bathroom. He scoops her up and takes her back to bed and penetrates her again whilst she says “No!”  She can’t scream as he holds a hand over her mouth and restrains her.  Going through her head are all the questions asked by the prosecution in such cases.  Afterwards she takes a shower.

Here the whole piece takes a seismic shift as Tessa goes out in the rain, her first thought being to go back to her mother.  She is now vulnerable and violated and the rain is pouring down.  Eventually she goes to a police station and reports the rape. 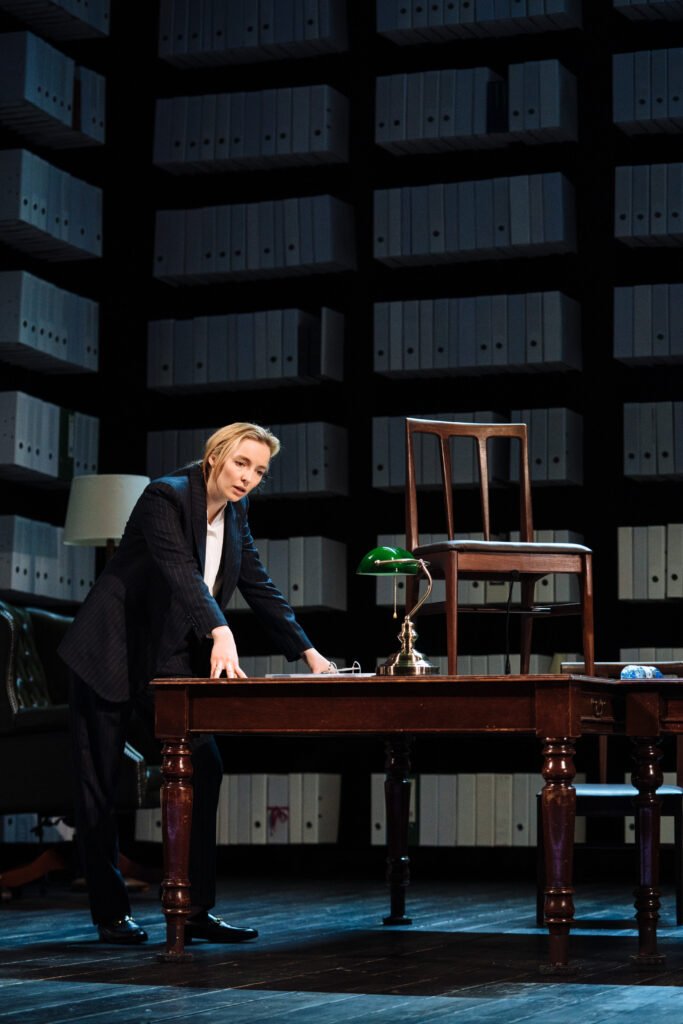 Day 782 at Inner London Crown Court.  The lighting changes to underline the scene changes.  There are four women on the jury but women are not a guarantee of a verdict favouring the woman.  The defence barrister appears sympathetic, asking her if she is alright but asks how the man held both arms and had a hand over her face.  Her replies sound confused and she knows that the law is against her with its criterium of reasonable doubt.

We now, the audience, have an explanation as to why so few cases of sexual assault reach the courts and a tiny minority have a guilty verdict.  The system favours the perpetrator.  If a woman puts herself in danger, by drinking excess alcohol her credibility will be questioned.  There are no independent witnesses to the assault.  She slept with him previously and consensually.

Tessa is crestfallen when she realises how the law’s truth works against her.  Julian’s friends cheer from the gallery.  This performance by  “Killing Eve” ‘s Vilanelle has to be the best London stage debut of an actor known for television and film.  It has long been sold out for a relatively short run at the theatre but will go to cinemas from 22nd June with NT Live this year so many more can see the nuances of her extraordinary unveiling of a barrister who now feels empathy.

NEWS: Jodie Comer to make her West End debut
in Prima Facie at the Pinter 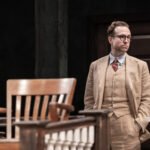