Since 2007 many of today’s musical theatre stars have been winners or finalists of this competition.   This year sees three women winners!

Desmonda Cathabel from Jakarta, Indonesia, studying at the Royal Academy of Music, has beaten off stiff competition from 11 other talented young singers to be named the Stephen Sondheim Society Student Performer of the Year.She was crowned last night at the end of a hotly contested West End sing-off final – the first since the passing of legendary composer Stephen Sondheim – fittingly, in the Sondheim Theatre.Runner Up  was Ella Shepherd from Bird College Conservatoire, with a third prize awarded to Jade Oswald, also training at the Royal Academy of MusicThis year, The Stephen Sondheim Society (a charitable trust founded in 1993) elected to open the field up to every student of musical theatre, and asked for auditions to be made via video. More than 350 submissions were received, and the final 12, plus 3 reserves, were selected by critic and broadcaster Edward Seckerson (Chair of the Judges) who said the standard in the final this year was the highest ever, and Musical Director Nigel Lilley.

Desmonda wins £1,000, the chance to headline her own Sondheim-infused cabaret in London and she will also be the subject of a Comparing Notes intimate conversation and performance evening at the Crazy Coqs in London, hosted by Edward Seckerson. The runner-up was awarded £500 and the third prize winner collected £250.Each of the 12 finalists had to sing a Sonheim song of their choice and a new song from new or up and coming composters and lyricists, curated by New UK Musicals. Desmonda sang ‘The Miller’s Son’ from Sondheim’s ‘Into the Woods’ and ‘I’m Ready’ by Eamonn O’Dwyer from his musical, ‘The Snow Queen’Desmonda grew up in Indonesia, where she says there is no musical theatre training, before travelling to London to study for her current Masters at the Royal Academy of Music. She said: “As someone coming from a faraway country to pursue an impossible dream of musical theatre and having English as a second language, I used to be extremely doubtful that I had what it takes to do it. But being selected to this final, doing Sondheim’s work – which is famously hard to do – I am now more confident that I’m good enough to do what I love to do and be able to convey the stories that I want to convey through my performance.”The 12 finalists were: Caitlyn Allen – Arts Educational Schools (ArtsEd), Rithvik Andugula – London Academy of Music and Dramatic Art (LAMDA), Annabelle Aquino – Royal Conservatoire of Scotland, Tommy Bell – Bristol Old Vic Theatre School, Joe Boyle – Mountview, Desmonda Cathabel – Royal Academy of Music, Ed Cooke – East 15 Acting School, Cassius Hackforth – Trinity Laban Conservatoire of Music and Dance, Izzy Mackie – Royal Academy of Music, Callum Martin – Bird College Conservatoire for Dance and Musical Theatre, Jade Oswald – Royal Academy of Music, Ella Shepherd – Bird College Conservatoire for Dance and Musical Theatre. Owing to the still-precarious situation with COVID-19, The Sondheim Society Trustees and judges also agreed to identify three reserves: Mackenzie Larsen – London Academy of Music and Dramatic Art (LAMDA), Izi Maxwell – Mountview, Tom Watson – Bird College Conservatoire for Dance and Musical Theatre.The students performed before a panel of highly respected judges including Daniel Evans, Theo Jamieson, Caroline Sheen, Liz Robertson and Michael D. Xavier. The Prize Giving was led by Julia McKenzie, a founding patron of The Stephen Sondheim Society and one of the most celebrated interpreters of Sondheim’s work.Jenna Russell returned as host, having previously anchored the Final in 2013. The Final was directed by Hannah Chissick. Musical Director Nigel Lilley.The competition has an impressive track record for identifying young talent. Previous finalists haveincluded Cynthia Erivo, Oscar Conlon-Morrey and Shaq Taylor, and winners included Alex Young, Taron Egerton, Turlough Convery, Erin Doherty and, most recently, Stuart Thompson (Most Promising Newcomer, Critics Circle Theatre Awards, for ‘Spring Awakening’ at the Almeida).Craig Glenday, Chair of The Stephen Sondheim Society, said: “What an absolute privilege it was for the Society to host these remarkable young performers at the Sondheim Theatre. Each of them took to the stage like seasoned pros, and they all rose to the occasion – you’d never know that they’d trained during a global pandemic! The standard in both the Sondheim numbers and the songs from New UK Musicals was exceptional, and having sat in the deliberation room with the judges, I can confirm that the debate was heated! The stronger the field, the more difficult it is to make a call, and almost every student was singled out for aspects of their performances. But it was Desmonda’s name that the judges kept returning to – a most deserving winner. With the young voices of NYMT also honouring Steve with their beautiful chorus of “Sunday”, what this evening proved was that the future of musical theatre is bright and in very safe hands.”THE STEPHEN SONDHEIM SOCIETYRegistered Charity Number 1142092Chair: Craig Glenday (craig.glenday@sondheim.org)Press: Tina Foote (tina.foote@sondheim.org)www.sondheim.org
The Stephen Sondheim Society is a registered Charity regulated by the Charity Commission (Registered Number 1142092). Its charitable aims are stated as being: to promote the public knowledge and appreciation of the works of Stephen Sondheim by such means as are charitable; and to advance the public education in music, particularly but not exclusively, to young people by holding an annual music competition. The Society produces cabarets, educational events such as workshops and  masterclasses, maintains the Sondheim Archive at Kingston University, and publishes Sondheim The Magazine. The jewel in the Society’s crown, however, is SSSSPOTY, which gives students of musicaltheatre invaluable experience working with established Directors and Musical Directors, and provides them with a chance to perform on a West End stage. 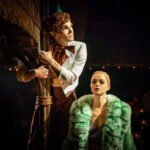 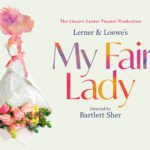 NEWS: My Fair Lady to open May 2022 at the London Coliseum