King Lear in a Red Cardigan

“Nothing can come of nothing”

It has been a wait of a quarter of a century to see Glenda Jackson acting again on stage after a career change took her as a politician, a Labour MP for a constituency in London’s Camden. And here in the old man of old men plays, she has the temerity to play King Lear in feminist Deborah Warner’s production at the Old Vic.

This play is my least favourite of the great Shakespeare tragedies and after seeing Derek Jacobi at the Donmar, I said I never wanted to see another Lear. Not because his was dreadful, it was wonderful and moving and with the total viewings at seven or eight, that seemed enough for a lifetime. I remember one where Lear was painted as an unreasonable old man insisting on his retinue of 100 followers and I started to understand his daughters’ feelings on the cantankerous and changeable old man. I remember the night at the Young Vic when during the blinding of Gloucester in the late Pete Postlewaite’s Lear, an audience member threw up.

I find all the sub plot stuff with Edgar (Harry Melling) as poor Tom mostly incomprehensible. Maybe the issue is that it is really hard to like these characters and so find someone to identify with.

Warner has cast non-Shakespearean actors as Goneril and Regan. Celia Imrie, a fine comedienne plays the elder daughter as if she is the stalwart of the local Women’s Institute. Jane Horrocks, also well know in Absolutely Fabulous and those Tesco ads played Little Voice to good effect but here is crippled by a pair of five inch heels in which to totter round the stage as Regan. William Chubb is an honest Albany, Goneril’s husband and Danny Webb as Cornwall, Regan’s spouse comes to a sticky end.

The production is ultra modern with white flats and functional blue plastic stacking chairs and brightly lit. Jackson as Lear wears a bright red cardigan, that signature garment of Warner’s productions. There will be no distraction of set from the acting of this King Lear. She is a small figure but a very powerful one and often her words are underlined by gesture.  As she talks about crawling towards death, her hands make the meaning absolutely clear. These emphases of words and phrase make Jackson’s performance remarkable and gripping.

The elder daughters brim over with insincerity and avarice. Cordelia (Morfydd Clark) makes her asides to the audience, refusing the exercise of “Who loves Daddy best?” and results in Lear’s anger and quick change of intention from loving his youngest most to the bare “Nothing can come of nothing”.

Jackson’s Lear in a rage is ugly and red faced to match her cardigan. Edmund the bastard is seen with unusual powers in a gym class scenario and seen as a very graphic bastard. Harry Melling is the outshone Edgar, the legitimate son of Gloucester (Karl Johnson). Goneril’s fridge is full of Red Stripe cans of beer which fuel Lear’s noisy entourage. Rhys Ifans is the Fool, crippled by his Superman outfit and gives an uneven performance as the sanest character in this play. His singing a song to a Bob Dylan tune is enjoyable. Celia Imrie’s Goneril is thin voiced, high pitched and petulant.

Act 3 Scene 1 is reminiscent of O’Toole’s legendary, flimsy, plastic inflatable battlements in the Scottish play at the same theatre as Lear’s storm scene is created with black plastic bags and battery torches. The storm is projected in black and white with lightning striking the ground and the Fool cowering as Lear rages.

Jackson is strong and vocally violent with Lear’s terrifying curses as she spits out, “stronger than the serpent’s tooth to have an ungrateful child.” Jackson has androgyny to perfection in her acting as an old age performance which doesn’t rely on gender discrimination. Some of the Shakespearean imagery and vernacular is very dense in King Lear and very difficult unless you have studied it in detail at school or university.

After the interval, Jane Horrocks’ Regan is twangy and common as no princess should be. In the blinding of Gloucester his left eye is thrown into the audience by her, this scene being played out in strong shadows on the white screen backdrop. I wasn’t convinced that Albany’s description of the elder girls as “Tigers not daughters” fitted these interpretations of Goneril and Regan. I could feel parallels between Cordelia and Ophelia in the later scenes. Lear in a wheelchair is reunited with Cordelia and he has moments of clarity in the midst of insanity. After the flashes of the battle scene, Lear and Cordelia’s bodies are dragged on in a blanket as Albany inherits the kingdom.

How I wish Glenda Jackson’s Lear had been free of the production’s distractions so I could remember just her brilliant rendition of Shakespeare’s lines and portents of an uncomfortable old age of Lear’s own making.

This is my late friend Johnny Fox’s inimitable review of the same production written for his own site.

Five things you may or may not know about Glenda Jackson?

I suppose what I’m driving at is that having swerved from the stage into a political career, my concern was how easily could she take up acting again? The astonishing thing about King Lear is that the answer is seamlessly: with power, and clarity, and complete command of the stage. Given how much acting has changed since 1980, this is astonishing and she deserves to be seen.

In her first appearance she’s supremely elegant, someone’s given her hair a modish cut and colour and walked her round Jaeger to select classy separates, although it’s debatable whether a red bias cut cardigan adequately stands in for the armour and mantle of King Lear.

Fashion plays a ludicrous part in Deborah Warner’s over-stylised production with Celia Imrie in a purple silk-lined swagger coat, an atrociously miscast Jane Horrocks in Littlewoods’ catalogue biker-chick leathers and jacked up on stratospheric fuck-me wedges to make her pass for Imrie’s sibling. Once Morfydd Clark’s dowdy Cordelia stoically accepts being deprived of her legacy, they look – and act – even more like Cinderella’s sisters.

Jackson’s bravura aside, you turn to the men for verisimilitude and a better reading of the poetry and drama in Lear – William Chubb beautifully understated as ever as Albany, Danny Webb a cruel and calculating Cornwall and Karl Johnson excellent as Gloucester, not least in his edge-of-the-cliff scene with Harry Melling’s emphatic and slightly wicked Edgar. I only recently learned Melling is a scion of the Troughton acting dynasty, his uncle David really should get a crack at Lear soon.  As I suggested  in 2009.

The atmospherics and projected torrents of the storm are glorious: elsewhere you could question whether this modernised and minimal production adequately tells the story to those who don’t already know it. There are more imponderables – why Sargon Yelda’s Kent must have such an impenetrable accent, why Simon Manyonda’s Edmund skips during the Bastard scene or moons the audience, and whether Joanne Howarth as the senior female in the ensemble would be Glenda’s understudy should there be a ‘Glenn Close’ situation.

But with Glenda’s undoubted vigour, it seems unlikely. She is quite, quite remarkable.

at the Old Vic 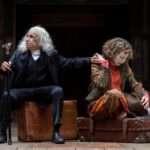 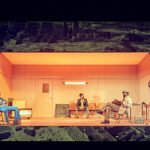