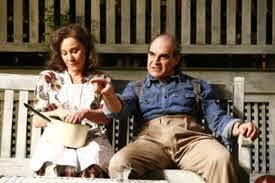 Zoë Wannamaker, steely and determinedly in denial, contrasting with her unruly hair which escapes from the pinned back style, opens the play with the symbolic device Howard Davies used ten years ago. During the thunderstorm, Kate wakes and comes into the garden and sees the trunk of the apple tree, which was planted for Larry, crack in two. If anyone believed in omens this would be it. As Kate recalls her dream we hear the roaring noise of aircraft engines behind the wind and storm. Her low groans when she reads the letter strike to the depths of a bottomless emotional chasm, a mother's love for her son. 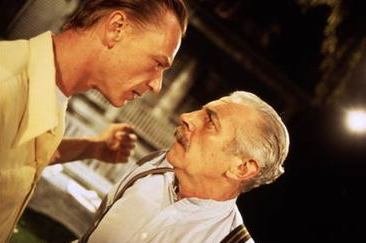 Set in an American town in the 1940s, the play looks at the conflict between the pressure to make money and ethics or personal responsibility. The cupboards are full of metaphorical skeletons. Director Howard Davies, who two years ago directed the acclaimed production of The Iceman Cometh in London and on Broadway, has revived Miller's play in a tense and exciting production.