Roy Williams's play about young boxers entering the professional world is a knock out!

“The first fight I’m having is with some tall, skinny looking kid. From the minute I step into the ring, he’s staring me out, like I burgled his house. What am I doing here? Oh! He lands one right on me. I’m going dizzy. I’m all numb. I wanna go home. I’ll keep out of his way. (Bell rings)”
Leon

Note: This review of Roy Williams’ play Sucker Punch still rings the bell after a decade. His new play, written jointly with Clint Dyer, Death of England: Delroy kicks off at the National Theatre in October 2020. Daniel Kaluuya makes his acting debut here.

Roy Williams’ plays can be enjoyed at many levels and so it is with his latest and original offering at the Royal Court, Sucker Punch which follows a group of young boxers in a club in a run down area of London in the 1980s. Besides the sports story which culminates in a boxing match being excitingly staged in a real ring, there are observations about race and friendship and about racism and sport.  Young men are given opportunity, forge ambition and career, break away from family ties and choose their own loyalties. Williams has also used the play to comment on how professional boxing is run in the States as opposed to the UK with one of his characters, Ray, a manager based on the legendary flamboyant promoter Don King.

Two young black actors have been chosen and taught enough of the boxing moves to convince onstage. Errol Christie, former European Boxing champion as Boxing Trainer has worked wonders. Daniel Kaluuya plays Leon, Anthony Welsh his best mate Troy. They both hang round the club run by Charlie (Nigel Lindsay) where they watch a young white boxer called Tommy (Jason Maza) who is starting out in competitive boxing. Charlie’s pretty daughter Becky (Sarah Ridgeway) helps out her father with the book keeping which he neglects through a lack of business acumen.

The atmosphere has been created at the Royal Court by pulling out much of the stalls seating and replacing it with chairs down below, but upstairs, creating a full circle out of the normal semi-circular Circle. In the middle is suspended a roped boxing ring (why is a ring square?) with punch bags and gym space to the side. The set is a triumph for Miriam Buether who gets splendid help from Peter Mumford’s lighting and Gareth’s Fry’s authentic sound effects. As Leon narrates interludes in his story to fast forward us in his career, the lights are dimmed and there is a rhythmic drum beat, the punch of a glove hitting its mark creating excitement and tension.

Leon has two father figures, his trainer Charlie who is white and his real father, Squid (Trevor Laird) who is a betting man, a womaniser and always borrowing money from his son.  While Leon works hard at his sport, Troy becomes politicised and mocks Leon as an “Uncle Tom”. With the backdrop of the inner city riots, Leon falls out with Troy after they are chased by the police and conformist Leon leaves Troy to face the cops alone.  Troy emigrates later to the USA but the grudge will be remembered. The play culminates in Leon fighting an American boxer for a World Title with Gary Beadle as Ray, the larger than life, fur coated, American boxing promoter.

We do not stay long enough with the boxers to see them damaged physically from fighting but we do learn who takes the profits and what a precarious living this can be with a fickle public.

I cannot praise the performances too highly. Daniel Kaluuya is magnificent. Many of his lines are spoken when he is also working out, during press ups, squat thrusts. It’s an amazingly physical and energetic performance and sure to be nominated in the 2010 theatre awards.  His signature in the ring is to give a little dance, hugely popular with the crowd, as he inserts a moonwalk routine and humour into the sport as entertainment.

Leon Baugh is the choreographer. Nigel Lindsay’s dedicated but poor gym owner shows his racism towards the man who has shown such loyalty to him and forces Leon to make a choice. Nigel Lindsay has the weariness of someone who has never made the big time but who is still passionate about the sport. These are flawed but believable characters. Anthony Welsh’s Troy has more bravado, more cheek than Leon and a squirmingly obvious chat up technique. To convey the transition from boyhood to manhood, Leon and Troy change from sportswear to slick suits and it works!

The match in the ring is set in America. There’s loud music and cheering, flashing lights and bells, satin dressing gowns and a clock ticking rhythm.  The numbers light up for each round. A fight scene is played in slow motion.  I have never seen such a good re-creation of a physical sport onstage as the seconds wait in the corner with sponges and towels. Sacha Wares excels directing in unusual and inventive spaces.

Roy Williams has a gift for authentic dialogue and spirited characterisation blended with wit. Sucker Punch is wholly original, brilliantly enjoyable and is an undisputed knock out production.   Don’t miss it! Five stars. 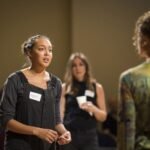