The Hamilton phenomenon takes London by storm in this brilliant and exciting musical...

“Who lives, who dies, who tells your story?”
Tagline for Hamilton

Note: This is our first review of Hamilton in December 2017 in London with the original London cast. I hope this review will let you feel you are “in the room where it happens.”

Hamilton is the most anticipated arrival in London from Broadway since The Book of Mormon. In London, we really liked Lin-Manuel Miranda’s In the Heights with its revolutionary and exciting choreography but a hip hop musical based in the eighteenth century on real life historical figures, what could that really be like? London has been getting ready for some time since Billy Elliot closed at the Victoria Palace and Cameron Mackintosh has once more invested in the fabric of our beautiful early twentieth century theatres with a splendid restoration of the building.

The other innovation which was tried out at the opening of JK Rowling’s play Harry Potter and the Cursed Child is to cut out the ticket touts, the people who make a living reselling tickets at extortionate prices. This means that no-one will have a ticket until the night or afternoon of the show. The queues will go round the block to pick up the tickets but there is no-one outside scalping the tourists. The touts have nowhere to go because no-one gets out of the theatre with a ticket until the end of the show. It is a strangely democratic move and one which I feel Alexander Hamilton would himself have approved of. The only way to get a ticket is to book ahead and show up with your ID and credit card.

My first impression was the joy of seeing British black musical actors given starring roles. Giles Terera and Jason Pennycooke have long been admired by the critical community but rarely do they achieve principal roles. Giles Terera plays Hamilton’s long term rival and adversary Aaron Burr, a role second only to Hamilton himself, and in the show’s first few minutes, Burr tell us that he was the fool who killed Hamilton. Jason Pennycooke, a diminutive figure with a larger than life personality takes on two large roles: firstly the French supporter of the American Revolution, the Marquis de Lafayette and later, Thomas Jefferson. Cast as Alexander Hamilton is a relative newcomer to the London stage, one of our recent RADA graduates, Jamael Westman. Tall and commanding, his performance is self assured and a brilliant piece of casting as he owns the stage.

The opening number introduces us to the history of Alexander Hamilton, born in the Caribbean , coming to America as an immigrant, “How does a bastard, orphan, son of a whore/  And a Scotsman, dropped in the middle of a forgotten spot in the Caribbean by providence impoverished,/ In squalor, grow up to be a hero and a scholar?” Hamilton was a man who used his brain to self start and came to America to study at King’s College in New York, now Columbia University.

The rhythm of the rap music is thrilling and infectious and the rhymes seem sensible and better than the triteness of rap verse. I wouldn’t count myself a rap fan but I found the Hamilton tunes really worked wonders. Of course there is also wonderful choreography, girls in corsets, jodphurs and knee high boots and muscular, bare armed men using the stage revolve to ratchet up the excitement. The colours are cream and brown and ochre. It is feisty and sexy at the same time, and very, very professional.

Hamilton’s ambition is expressed in the second song, “My Shot” when Lafayette (Jason Pennycooke), John Laurens (Cleve September), Hercules Mulligan (Tarinn Callender) and Hamilton protest at English rule. The refrain is “I’m not throwing away my shot” as they plan to break away. Burr advises them to be cautious. As they plan the revolution they encounter the heiress Schuyler sisters, Angelica (Rachel John), Eliza (Rachelle Ann Go) and Peggy (Christine Allado).

It is Angelica who comes off best in Hamilton with her flirtatious relationship with Alexander Hamilton but it is her younger sister Elizabeth that he marries. Rachelle Anne Go as Eliza has the least clear singing diction in this musical where the words are very important. In her final scene where she burns the letters, she seemed to have trouble reaching some of the high notes. It is Angelica who sings, “I’m just sayin’, if you really loved me, you would share him,” and Rachel John’s singing voice is strong.

Michael Jibson plays King George III, a wry look at the English monarch who lost us the Americas! He is hugely cheered in London despite being a figure of fun.  He sings, “I’ll kill your friends and family to remind you of my love.”

Hamilton’s skill as a wordsmith writing speeches brings him to the attention of George Washington (Obioma Ugoala).  The revolutionary war is represented by lovely angular choreography as Hamilton repeats that he’s “not throwing away his shot. ”  I know that musicals will take some liberties with history and my reservations, if I have them, are about the peevish portrayal of Thomas Jefferson, seen as a comic role rather than the great statesman I consider him to be.  The second act sees Hamilton fighting scandal after a dalliance with Maria Reynolds (Christine Allado) but also the loss of his son Philip in a duel.  The controversy comes as Hamilton, who opposed the Virginian lobby, then sided with Jefferson against Burr in the election of 1800.  What Hamilton does is to illustrate Alexander Hamilton’s remarkable independence and loyalty to his guiding principles whilst acknowledging more controversial aspects of his life.

The set has a solidity of red brick walls with a wooden gallery to provide another playing area, hung with ropes and not dissimilar to a Wild West setting. The costumes are beautiful — with elegance and precision, cream breeches and tailored jackets with rows of silver buttons.

It is still curious how the hip hop score has been blended to provide such clarity of lyrical progression: it is this which makes Hamilton pure genius.   I feel very privileged to have been one of the first to see Hamilton in London where I expect to see it deservedly winning this year’s Best Musical award and staying at Victoria Palace until it needs another renovation.

The Story of Tonight

That Would Be Enough

History Has Its Eye On You

Say No to This

The Room Where It Happens

Washington on Your Side

Blow Us All Away

The World Was Wide Enough

Hamilton
Inspired by the book “Alexander Hamilton” by Ron Chernow

Music and Lyrics by Lin-Manuel Miranda
Directed by Thomas Kail

Streaming on Disney Plus, review here

REVIEW: Get Up Stand Up! The Bob Marley Musical, Lyric Theatre (2021) 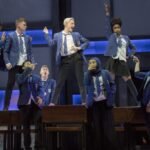