“She was a man, she was a woman—She knew the secrets and shared the weaknesses of each.”

Virginia Woolf’s Orlando was written as a joke, a play on the life of her lover Vita Sackville West as a biography, but not of truth, but of fantasy.  Daniel Defoe and his satirical biographies were cited as an inspiration to Woolf.  Sarah Ruhl’s stage adaptation was first seen in New York in 1910 directed by Rebecca Taichman (see Indecent).  This New York production was commended for its visual design. Instead of expensive visuals, at Jermyn Street we rely on the humour of the piece and a lovely performance from the central figure who changes from a beautiful boy to a young woman over the course of 350 years.

Three chorus narrators (Tigger Blaize, Rosalind Lailey and Stanton Wright) open the play introducing Orlando (Taylor McClaine) in the reign of Elizabeth I (Tigger Blaize).  The queen is greatly taken with the young man and his trim legs and piles him with gifts and appoints him as steward and treasurer.

As the Tudor years near their end, we hear about the time that the River Thames froze over. Actually the Great Freeze was 1683-4 but one of the marooned boats in the ice is Russian and Orlando meets and falls for Sasha (Skye Hallam), a Russian princess.  Sadly Orlando sees the greatest love of his extraordinary lifespan in the arms of another, a Russian sailor.  The descriptions of the iced up Thames are poetic,

We move to Regency times and Orlando is pursued by a Romanian Arch Duchess (Tigger Blaize specialising in predatory women).  It is all quite camp and jolly humour.  So Orlando aged 30 flees to Constantinople where he falls asleep and wakes up a woman.  The time travelling Orlando now symbolises the spirit of our 21st century age with their gender fluidity.

We enter Victorian times in which Miss Orlando although delighted to be a woman finds the prevailing morals, like the corsets, restrictive.  She still lusts after Sasha.  In a Wuthering Heights moment she flings herself on the ground as a bride of Nature.  Enter the Gothic hero, Marmaduke Bonthrop Shelmerdine (Stanton Wright) a pleasant change from the sinister Romanian, who now declares himself Duke rather than Duchess, but in this gender swapping, time shifting comedy, who knows who is what or when?

The design is like a pantomime, roughly painted arch, in keeping with the lightness of the Woolf’s original but it probably needs the talent of Rebecca Taichman to raise it out of the ordinary.  We shall however see more of the delightful Taylor McClaine!

Running Time: One Hour 40 minutes with an interval 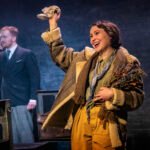