“Then all afire with me: the king’s son, Ferdinand,

Was the first man that leaped; cried,

‘Hell is empty And all the devils are here.’ “

Why does anyone go to see plays by Shakespeare with his outdated ideas of sexism, racism and elitism?

Surely what we need now is to be inventive with Shakespeare’s plays and make people laugh as much as possible?

I don’t agree with either of those statements above.  I go to Shakespeare to listen to the beautiful verse and for visuals that reflect his words.  I’m not into director’s theatre where the director’s conceit, the importance of a director making his mark is more important than the playscript. I’m not into wokery and rewriting Shakespeare to reflect current fashion.

I don’t agree with rewriting historical facts, if they are indeed facts.

Although I have a lot of sympathy for Richard III and disbelieve his vilification in Shakespeare’s play, I don’t advocate rewriting the play Richard III  but judge it as the product of its political climate. 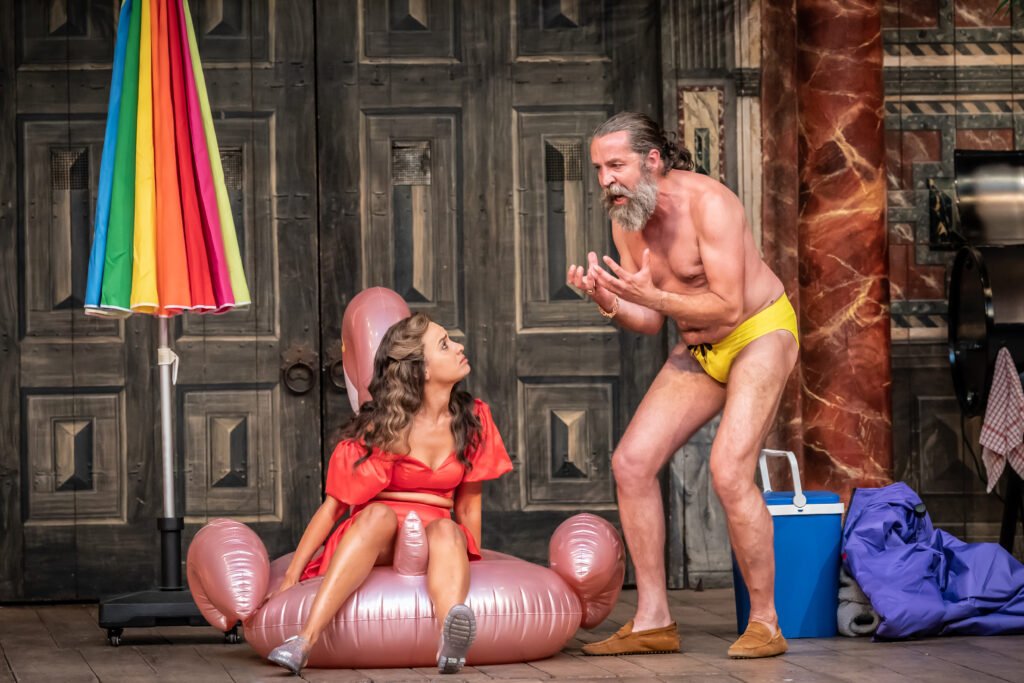 I can accept Shakespeare’s language without accepting that his social values, sixteenth/seventeenth century values, are correct now.  In many ways we are more civilised and more tolerant of otherness than were the citizens of Hartlepool in the early nineteenth century, whom legend has that they hanged a monkey believing him to be a French spy.

So to the recent productions at the Globe.  Set up in the late 1990s as a recreation of the Elizabethan theatre, in the 2000s it tried for authenticity, no Velcro on the beautifully made costumes and for a season or two, reverting to original practices with female parts played by men.  It rapidly became a tourist attraction with the cast catering to the comic desire of the groundlings even at the most tragic moments. And so to The Tempest which for me competes with the most egregious production, I’ve seen so far at the Globe which was this season’s Hamlet .

Prospero’s magical isle is a tawdry beach resort with beach umbrellas, beach balls, a blown up flamingo chair and artificial palm trees.  Some palm branches haves been fixed to the pillars to make the views from the Upper Gallery sides even more obstructed (see photo).  Prospero (Ferdy Roberts) loses his magic cloak when he says to Miranda he wants her to hear his story with0ut magic or sorcery.  Instead of realising his emphasis on the truth of what he says we are transfixed by his brief yellow swimming trunks and his recent visit to the spray tanning parlour.  What price those Elizabethan values on the palest of white skin?

While Ferdy Roberts has the skill to speak the verse and be heard some of the others did not, at least they could not be heard in the Upper Gallery.  The romance between Miranda (Nadi Kemp-Sayfi) and the shipwrecked Ferdinand (Oliver Hubard) doesn’t really convince.  Ariel (Rachel Hannah Clarke) is clad in rhinestone cowboy outfits like a Vegas entertainer but loses that ethereal quality of the bee sucks song.

The Shakespearean comedy items, often the least appreciated by a modern audience are here made the most of to pantomime level.  The groundlings in the Pit adore it.  Stefano (George Fouracres) and Trinculo (Ralph Davis) and Caliban (Ciaran O’Brien) cavort with a giant lobster on the beach but not a fresh lobster as this one is boiled red. Caliban gets the crowd to repeat the refrain “Freedom”  and of course audience participation gets the mob baying.

Caliban who is described by Shakespeare as sired by the Devil is an anaemic staff member who might be the person cleaning the swimming pool but he is allowed to garner sympathy for his plight in being robbed of his mother Sycorax’s island by Prospero.

There is a “Three Lions on My Shirt” chorus marking the night I saw the proximity to the British Lionesses in the Euro football final.  Anything for cheap popularity here, except that the six Germans in front of me (Ticket cost at full price £300) had left at half time.

There is environmental comment about waste in holiday resorts.  The wedding feast tables are stacked with mock-ups of McDonald type packaging and container detritus.   The masque of spirits is provided by an assortment of floral wreathed head-dressed grotesques.  Sebastian (Lucy Phelps) says, “Now I will believe there are unicorns.”

A Harry Potter scarf appears, a Dobby mask and a slight actor dressed as Hagrid but don’t ask me why?  It is as if some of the ideas had materialised after a long drinking session in a hostelry!  For heavens sake don’t take anyone who is trying to master this play scholastically.

Prospero’s final speech is powerful and thankfully he has now dressed as European nobility do, when they are not sunbathing on their yacht off Biarritz, but what a shame about the production! 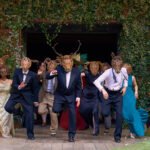 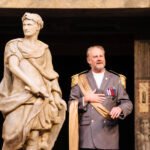