Hosted by Greg Barnett with a four piece band, five stars of London musical theatre gathered to sing and then talk about theatre, in aid of the “umbrella” charity Acting For Others, raising funds for people in showbusiness who have hit hard times.

Aimie Atkinson, who played Katherine Howard in Six and Vivienne in Pretty Woman sang songs from Dirty Dancing and Adele’s “Rolling in the Deep” in the first act.  She is a powerhouse of a singer, winning fame as one of Henry VIII’s wives in the phenomenon that is Six and she talked about Seven which brings together the original cast of “queens” in one show, as well as her continuing in Pretty Woman at the Savoy.

Cedric Neal, whom I saw last summer in Jesus Christ Superstar as Simon the Zealot, was a contestant on The Voice in 2019 and the recording of his “blind” Voice audition has had 5.6 million views on social media.  He’ll be playing Goldie Wilson in Back to the Future opening this summer at the Adelphi.  Cedric sang Billy Joel’s “Just the Way You Are”.  His voice is to die for.

Cassidy Janson star of  Beautiful and Chess,  recalled the peculiar situation of receiving the Best Supporting Actress in a Musical Olivier award for &Juliet  with no audience applause.  She mentioned  her new show It All Happened in Laurel Canyon.  She sings one of Florence’s songs from Chess.

Julian Ovenden related some experiences from My Night with Reg and talked about playing French planter Emile de Beque in South Pacific at Chichester from July.  He sang Tom Waits San Diego Serenade.  Knowing him principally as an actor, his rich register blew me away.

The second half concentrated on show tunes from Parade, Funny Girl, Annie Get Your Gun, The Wiz, Waitress, Chess and Kinky Boots.  The exhilarating finale from the three women is “Over the Rainbow”.

This is a really feel good concert celebrating the exceptional talent in musical theatre we have in the UK and exhibiting the thrill to be back in live theatre.  The show is available to stream along with two future Monday Nights at the Apollo.

Monday Night at the Apollo

This event will be available to purchase until 19:00

for 72 hours after purchase. The 3-Show Bundle

can be purchased until 16th July and purchasers

have on-demand access for all three shows until 19th July.

Reviewed by Lizzie Loveridge at the Apollo 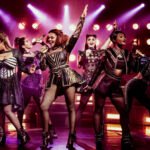